What do these “journalists” have in common?

Answer: Public Awareness of No Name’s treachery is rising. 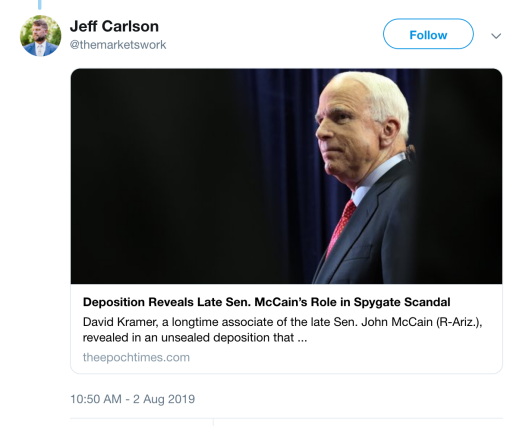 From the Epoch Times:

“No Name was a leading figure in the attempted coup. Either Brennan was blackmailing NoName or he was just a sore and dirty loser.

“David Kramer, a longtime associate of the late Sen. John McCain (R-Ariz.), revealed in an unsealed deposition that he had contact with at least 14 members of the media regarding the Steele dossier—a collection of 17 memos containing unverified allegations against Donald Trump.

Additionally, Kramer gave a full copy of the unverified dossier to then-Senior Director for Russian Affairs at the National Security Council Celeste Wallander, Rep. Adam Kinzinger (R-Ill.), and then-House Speaker Paul Ryan’s chief of staff, Jonathan Burks. Kramer also provided a briefing in early December 2016 on the dossier to both Wallander and Victoria Nuland, then the assistant secretary of state for Europe and Eurasian Affairs.”

McCain famously denied ever providing a copy of the dossier to BuzzFeed, telling the Daily Caller on Oct. 18, 2017: “I gave it to no one except for the director of the FBI. I don’t know why you’re digging this up now.”

Read it all. And then tweet it to his darling daughter who’s always singing his praises on Twitter.