Now, you can sit there all day and say “But I don’t **agree** with the law!” Awesome! What does that change? Well nothing really, but hey, thanks for sharing your thoughts!

Sessions….cannot…have…oversight…and…authority…over…people…investigating…him. So he’s telling you THE TRUTH. You may not like it. Maybe you don’t what to hear it, but it’s the truth. Trump & Co. played the plotter’s game with them.

They **acted** like they wandered into DC into their respective offices, Trump in WH, Sessions in DOJ, Pompeo at CIA, etc. without having a CLUE they were all under surveillance & being investigated as Russian agents.

That’s not just Trump who knows what’s up. SESSIONS knows what’s up. But Sessions plays this role perfectly. “Wow, people I’m now in charge of here at the DOJ/FBI have been investigating me & spying on me for months, you say? For being a Russian agent? Wow.”

“Well my goodness folks, the law is clear. I can’t be in charge of supervising any of the people running these Russian investigations that were already started when I got this job. Especially since as part of their investigation, they have been spying on me.”

So people who tell you Sessions should have **immediately fired Comey** and everybody else & shut it all down right then in March of 2017 are blowing smoke up your ass. That’s not how you catch these people and build an airtight case against them.

Sessions follows the law and recuses himself. That was on March 2, 2017. It immediately becomes clear that WHOEVER STEPS INTO THE DEPUTY ATTORNEY GENERAL job would be the person overseeing the Russia-related investigations. The person **already nominated for that job**?

Remember your timeline. The **latest** Trump gets tipped off that federal agents are SPYING on all his transition team is mid-November 2016.

RR is nominated to the DAG post on Feb 2.

RR is confirmed as DAG on April 25

But **the narrative** you’re told to go with is that clueless Trump & Co., still not realizing what was happening, still having not a clue what they faced, handed the all important DAG job to a literal snake.

So that **looks** like two HUGE WINS for Team RussiaGate early on, doesn’t it? They get Sessions to recuse, because they were SPYING on him for being a ‘Russian agent’, and they get RR dropped into the DOJ in late April. Well do yourself a favor. Explore an alternative.

A guy they can’t spy on replaces the guy they WERE spying on. And it just so happens, the new guy dropped into their midst, what’s the first 2 things he does? He fires Comey & wrests control of the Russian investigations away from McCabe.

He then appoints Robert Mueller to be the Special Counsel, who will end up proving as RR carefully gives him the super duper widest scope ever, that there NEVER WAS ANY EVIDENCE OF RUSSIAN COLLUSION.

But that’s not all Rosenstein does. Everything these SpyGate plotters were HIDING from the Inspector General, RR begins HANDING IT OVER TO HIM. Then RR OK’s the public release of much of this information, including the Strzok/Page texts in Dec. of 2017.

Funny how nobody asks this question: At least he let them prove there was never any evidence of Russian collusion, right? Because as I have been laboring to demonstrate to brain washed people for over a year now, THAT’S EXACTLY WHAT MULLER’S **BIGGEST** ACCOMPLISHMENT WAS.

Whatever Mueller & Weissmann & the rest of those bloodthirsty cretins **THOUGHT** their wonderful Special Counsel team was going to do, when the rubber meets the road, what was the big result of the Mueller final report? RussiaGate was a HOAX. Bob Mueller **proved** this.

Now, did he **WANT** to prove that? Of course he didn’t. Neither Mueller or anybody on that ‘dream team’ he assembled would have ever believed all they had at the end of the show was a bunch of big fat nothing on election collusion or Russian agents.

People regale me with tales about how Sessions and Barr or whoever got Rosenstein to ‘flip’ and become Trump’s counterspy on the plotters. There’s just ONE PROBLEM with this theory. Barr says this **isn’t true**. And he said this UNDER OATH in front of CONGRESS on TV.

No matter HOW many times I tell people this, the brain washing runs too deep. They literally can’t process it. Rosenstein was sent in there to spy on and gather evidence against the people working under him on these Russia related investigations. Even BARR saying this = nothing.

Senator Kamala Harris truly believed she had a point. A real point. She asks Barr a really pointed question. The answer he gives her went right over her head. 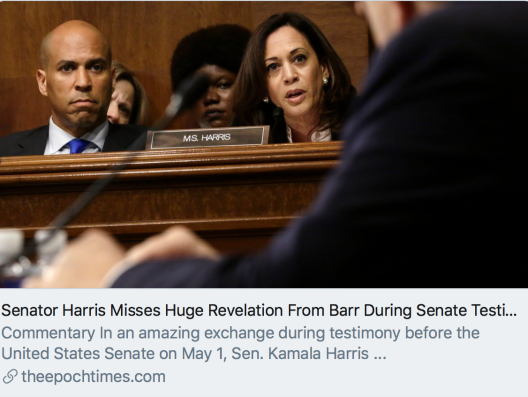 Recall after they figured out they were gonna get NOTHING on Russian agents or election collusion, Mueller & his team of skunks desperately spent 18 months trying to formulate an exotic reading of an obstruction of justice charge that they lacked the balls to make themselves.

So Muller’s SC team **punts** the charging decision upstairs to newly installed AG Bill Barr & RR. Who promptly grin at each other and shitcan it & go out for beer & pizza. Later, Sen. Harris demands to know why Barr let RR participate in the decision not to charge.

Harris thinks she has a legitimate conflict of interest. RR should NOT have been allowed to participate in the decision to shitcan the Trump obstruction of justice charge when he’s a key witness in the firing of James Comey as FBI Director?

Listen to what Barr tells her: Rosenstein was cleared to be a witness against ALL the people he was supervising at the DOJ/FBI when he took the DAG job in April of 2017.

No matter how many times you tell people this, they fail to grasp it.

The AG testified under oath that the DOJ Ethics Dept. cleared RR to be able to both supervise these people & then testify against them at a later time.

There is only one kind of person who gets that kind of clearance to participate in criminal conspiracy and yet later testify as a government witness against the conspirators.

Do you know what we call that person?