McConnell Out? Insiders Drop Bomb, May Not Finish Out Term: Report 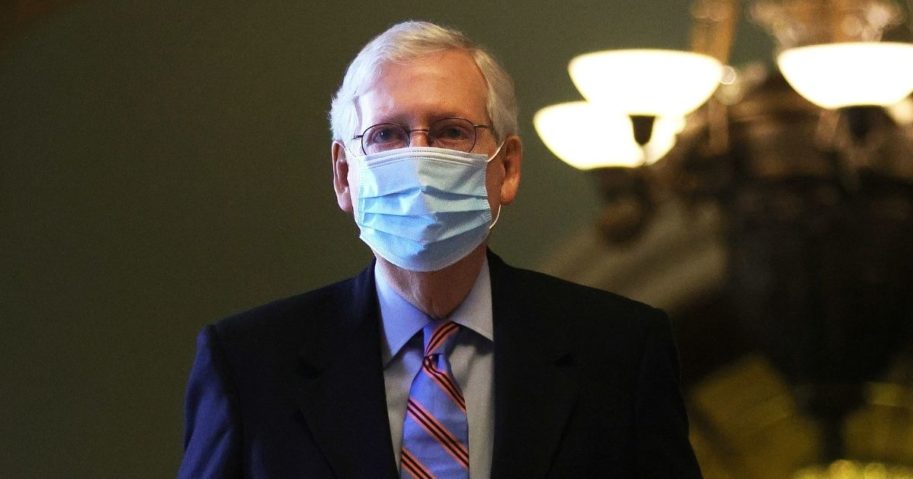 After being elected to seven terms in the U.S. Senate, a report claims Senate Minority Leader Mitch McConnell might be on his way out and seeking someone to replace him.

McConnell, 79, most recently cruised to his sixth re-election in November by a margin of 57.8 percent to 38.2 percent over Democratic challenger Amy McGrath. Former President Donald Trump endorsed McConnell in the race, which Democrats reportedly felt would be more competitive than it was.

But following Biden’s inauguration, Trump’s recent and scathing condemnation of the former Senate Majority Leader and a future in GOP politics where the Republicans of old and their way of doing business seems destined to be vanquished from the party, a report alleges that just four months after defeating McGrath, McConnell is seeking an exit.

Nick Storm, writing for The Intercept, reported that the Kentucky legislature is currently seeking to strip the state’s governor, who for now is Democrat Andy Beshear, of his ability to choose a replacement for the long-serving McConnell, should he retire.

Storm reported McConnell is behind a bill in the Kentucky General Assembly that would “strip the governor of that power and put it into the hands of the state GOP,” and might ultimately help to place the state’s attorney general, Daniel Cameron, as McConnell’s successor.

“The new legislation, Senate Bill 228 — dubbed by some inside the state Legislature as the Daniel Cameron Election Bill — was filed on February 10, 2021, during the Kentucky General Assembly’s 30-day ‘short’ session,” Storm reported.

“The bill alters current state statute that allows the governor to appoint a replacement in the event of a vacancy to the U.S. Senate. If the bill becomes law, the appointment to fill a vacancy will be selected from a list of three names submitted by the state executive committee of the same political party as the senator who held the vacant seat.”

Cameron, whom Storm described as McConnell’s “protégé,” is reported to be at the top of the list. Cameron was born in 1985, which was the year McConnell first joined the Senate.

Cameron made a name for himself last summer when he called for peace and due process amid a tumultuous situation in Louisville after it was announced that officers involved in the shooting death of Breonna Taylor last March would not be charged with murder.

The 35-year-old, who is Kentucky’s first black attorney general, also made an impression with conservatives during the Republican National Convention in August.

Two other names were also floated as being potential McConnell successors: former United Nations Ambassador Kelly Craft and Kentucky Secretary of State Michael Adams. Neither candidate has the national profile of Cameron, however, which perhaps explains why he might be leading the reported race.

Kentucky state Sen. Tom Buford told The Intercept that legalization to change who would replace a senator, such as McConnell, is not about the potential the state’s senior senator might retire. Buford said the idea was first floated in 2017 after GOP Sen. Rand Paul of Kentucky was violently attacked by a neighbor.

Apparently, the state Republican Party feared that in the event of one of the state’s two GOP senators becoming incapacitated, an idea was spawned to ensure that the state’s Democratic governor did not appoint a Democratic replacement.

“That could have resulted in death, so … it sounded like a good idea,” Buford added.Would you like to see McConnell retire?

Other sources who spoke to The Intercept off the record claimed that McConnell’s desire to start thinking about hanging up the hat stems from both his age and health, and his desire to cement his legacy by ensuring that whoever replaces him — if indeed it is anyone — has the benefit of being an incumbent.

McConnell reportedly more than anything is said to want to ensure that his seat doesn’t end up in Democratic hands.

Storm’s reporting has not been independently verified by The Western Journal.

But it isn’t at all far-fetched to see why McConnell, a lifelong and influential politician, might seek to call it quits while he’s ahead. McConnell would be 84-years-old at the time of his next election, and there is no guarantee that with bad blood between him and Trump, he’d be a shoo-in for an eighth term.

We are committed to truth and accuracy in all of our journalism. Read our editorial standards.