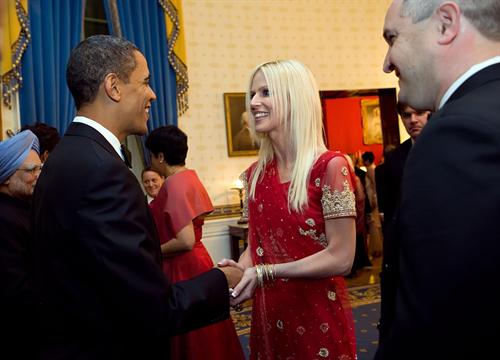 The Washington couple who sought fame like moths to a flame are getting all they could have wished for. They are center stage, bright national spotlights focused directly on them.

The White House party crashers have gained so much notoriety, they’ve now been given an even brighter venue that comes with a gold-plated invitation to appear at a little “do” the House Homeland Security Committee is hosting in their honor.

This morning Tareq and Michaele Salahi were blinking in the bright lights again, all gussied and miked-up for an appearance on NBC‘s TODAY, where the suddenly celeb blonde and her hubby looked a gift horse in the mouth and groused they didn’t like what they’d gotten.

The most infamous party crashers in the world said Tuesday that they hate that label, denied they finagled their way into a White House state dinner and insisted that they were invited to the bash by a Washington law firm with ties to a senior Pentagon official.

“This has been the most devastating thing that’s ever happened to us,” Tareq Salahi, along with his wife Michaele, told Matt Lauer in the couple’s first television interview. “We’re greatly saddened by all the circumstances that have been involved in portraying my wife and I as party crashers. I can tell you we did not party crash the White House.”

The couple said they are reeling from the media attention. “Our lives have been destroyed, everything we’ve worked for, Matt,” Michaele Salahi said. “For me, 44 years, just destroyed.”

Imagine… they’re so devastated, lives have been destroyed.  So distraught they’re shopping their story for major bucks.  They’re “reeling”, a euphemism?  Fishing for celluloid reels?

“We were invited, not crashers,” she said. “There isn’t anyone that would have the audacity or the poor behavior to do that … certainly not us.”

The couple finds itself feeling the heat of said spotlight, now emanating from the grandest venue in all of Washington, the Capitol Dome.  And they’re whining because the creme de la creme of toute DC wants to rub elbows with them in House chambers?  Quelle douleur…  This, the same couple who are embroiled in controversy over a bankrupt winery they own in northern Virginia? And are reportedly in line to appear in the forthcoming reality TV show, “The Real Housewives of Washington.” Tsk, tsk… Pardon my snark at their ballsiness.

The House Homeland Security Committee has invited the Salahis and the Secret Service to attend a hearing Thursday about the alleged security breach. You know, the one where they could have carried “bio-delicacies” into the White House?  Imagine a powder of anthrax under those lovely manicured nails… Ooops.  Buh bye Obama.

“We are cooperating extensively with the U.S. Secret Service on their internal review and investigation,” Tareq Salahi, 41, said, adding that the couple have turned over documentation showing that they were invited to the event. “The truth will come out.”

Aaah yes.  It eventually does for Friends of Barack.  They wished for a ride on the Obama Express.  In a twist of fate, they may find themselves under it.