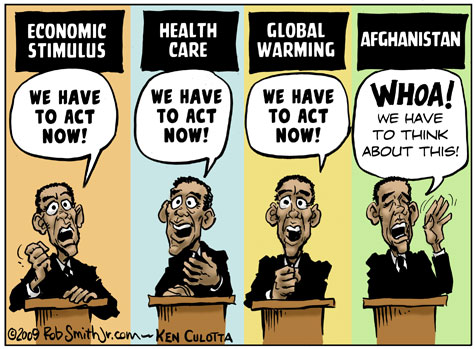 A friend who knows his way around the military wrote to me with his thoughts about Obama’s announcement on how he will prosecute the war in Afghanistan, which he subsequently posted at his site.

So, how did Mr. Obama, after nearly three full months of careful, ponderous debate… considering every possible option… have managed to blow it? What’s particularly surprising is that he did it in a way that should have surprised… no one. Mr. Obama has previously shown a predilection for avoiding conflict, decisiveness, and wading bravely in front of a movement. As much as the previous White House occupant was mocked for his self-declaration, there was truly little doubt that he was a ‘decider’. Mr. Obama, on the other hand, in his Illinois legislature days showed a favored choice of not voting more liberal or conservative, but just… Present. The Safe alternative.

I have little doubt that the previous three months consisted of the President desperately wishing for this particular choice to pass him by. He’d have given Michele’s right arm if he thought it might have helped matters. Anything but make THIS decision. Essentially, it came down to: Should he aggressively advance the war, giving General McChrystal everything he asked for and needed to win, OR should he follow what he’d suggested for Iraq and begin the return home of our troops?

It was a decision fraught with consequences. With his popularity, and political cache declining, his marketability and power in Washington is steeply dissipating. This is currently evidenced by a Health Care bill which, once promised to be done by August, may be lucky to be completed before Christmas, and even then, it won’t be pretty. He would risk annoying a major constituency in some way no matter what he chose. Here he was, the most powerful man in America, able to fire CEOs, win Nobel Peace Prizes based on 12 days of work experience, and he’d been reduced to damned-if-he-did-and-damned-if-he-didn’t.

It’s ironical isn’t it that the President, who as a candidate had mocked his opponent as not being ready for the crisis 3 am phone call, was now wilting in the face of just such a decision? Even more so when that former opponent, now his Secretary of State, was speaking far more decisively and clearly about the decision ahead.

So, what did Mr. Obama do (besides hope for a sudden change in the situation)? He did what he often does, try to please everyone. He didn’t vote Yay for war or Nay – bring them home. He voted Present. Do both, yet neither.

And pleased no one. Not one person. There’s something to be said for being decisive, after all.