Why New Englanders will NOT be hosting Labor Day cookouts this year. 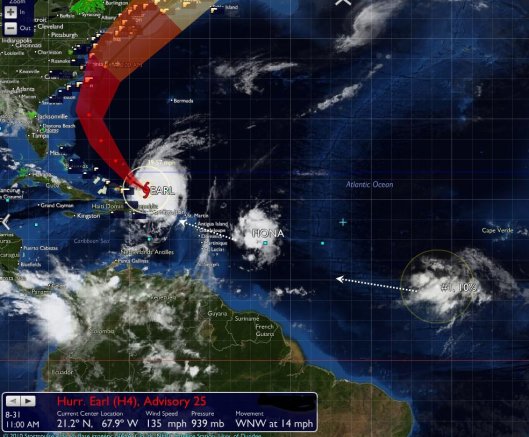 Earl remains a powerful hurricane as it passes by north of Puerto Rico. As of 11 a.m., EDT, Hurricane Earl was located at 21.2N & 67.9W or 335 miles east of Grand Turk Island. Maximum sustained winds remain at 135 mph with higher gusts making it a dangerous Category 4 hurricane. Earl is moving west-northwest at 14 mph with a minimum central pressure of 939 millibars.

Our local weather forecaster Steve Benn reports good news for surfers; bad news for everyone else:

Computer forecasts continue to show Earl taking a more northwesterly course today and on Wednesday. It is important to note, however, that the computer forecast tracks have been biased to the right over the past few days. So there is some chance that Earl could end up tracking farther west than expected through Wednesday and Thursday before turning more northward. This is why the window of uncertainty extends into the eastern United States.

People living and visiting the coastal sections of the United States should continue to monitor the progression of Earl closely. Large waves of 7-10 feet are expected to build along the Southeast coast on Wednesday night and Thursday with waves reaching up to 15 feet along the Outer Banks of North Carolina.

The threat for rough surf and rip currents will extend into the mid-Atlantic and New England coastal areas beginning on Thursday night and persisting through Friday. If Earl follows its forecast track, tropical storm conditions will occur at the Outer Banks of North Carolina on Thursday night into Friday and if the storm tracks only a bit farther west, then there will be hurricane conditions. On our forecast track, Cape Cod and the nearby islands will experience tropical storm conditions Friday night into Saturday.

Meanwhile, Tropical Storm Fiona is following on the heels of Hurricane Earl. As of 11 a.m., EDT, Fiona was centered near 15.9 north, 55.3 west, or about 440 miles east of the Leeward Islands. Maximum sustained winds were near 40 mph, and Fiona was moving west-northwest at a very fast 24 mph. At this fast pace, Fiona will be near or over the northern Leeward Islands on Wednesday. A tropical storm warning is now in effect for St. Martin and St. Barthelemy. A tropical storm watch remains in effect for the islands of Antigua, Barbuda, Montserrat, St. Kitts, Nevis, Anguilla, St. Maarten, Saba and St. Eustatius. A general track to the west-northwest should continue with some reduction in forward speed over the next couple of days before turn more toward the northwest and more slowing later this week.

Fiona is close enough to Earl that Earl’s outflow is restricting Fiona’s further development, as is Fiona’s track over waters churned up by Earl. These factors will likely continue to inhibit Fiona’s development for the next few days. However, as Fiona slows down over the next few days, this could become less of a concern. On the other hand, southwesterly wind shear that will affect Fiona later this week could limit how strong it can get.

Finally, a strong tropical wave, INVEST 98L, to the southwest of the Cape Verde Islands along 30 west south of 15 north has a chance to become a new depression over the next few days. This wave is tracking west at about 8 degrees of longitude per day.