I love that she loves Israel. 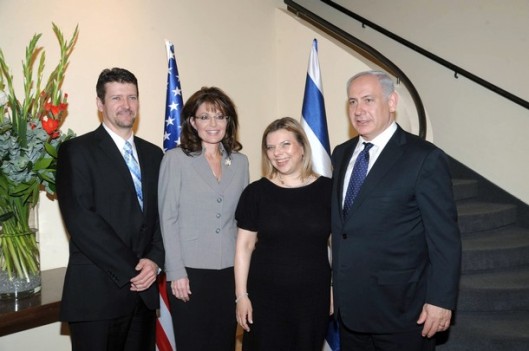 Former Republican vice presidential candidate Sarah Palin and her husband Todd concluded their brief first visit to Israel on Monday by meeting Prime Minister Binyamin Netanyahu and his wife Sara at his official residence in Jerusalem.

Ahead of the meeting, Netanyahu’s office checked with Palin to see whether they could expand it to a full reception for her with other politicians and aides, but she politely declined.

In an effort to keep her visit as private as possible, Palin also declined all requests for interviews and did her best to avoid the media as she toured the Mount of Olives and Christian sites in Jerusalem on Monday.

Palin was due to leave Israel early Tuesday morning.

In private conversations, she vowed to return soon – for a full week – and said she would meet with more politicians and the media then.