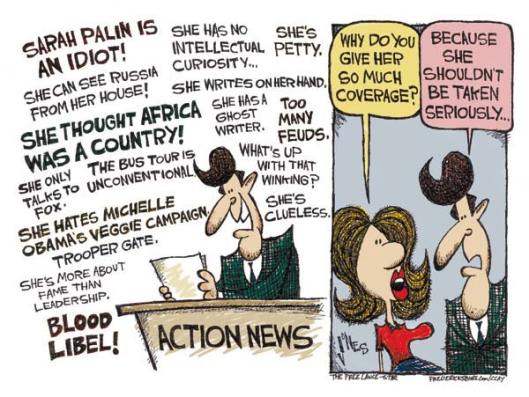 Noel Sheppard at Newsbusters took a close look at this weekend’s Fox News Watch analysis of how the media has been treating the Sarah Palin bus tour.  He writes:

The gang at “Fox News Watch” had some very interesting things to say about how media members who absolutely despise former Alaska governor Sarah Palin just can’t get enough of her “One Nation” bus tour.

The best line came from liberal commentator Kirsten Powers who said of the former vice presidential candidatee, “It’s actually kind of refreshing to see somebody who just says screw you to these people who treat her like garbage” (video follows with transcript and commentary):

Pretty interesting to have four media members of differing political persuasions all agree on how poorly Palin is and has been treated by their colleagues. If it’s so obvious to these four, why don’t the rest of the press get it?

Or is there something else in play?

Are the media just furious that after almost three years of tearing this woman apart, they haven’t been able to finish her off? Rush Limbaugh commented on this Friday:

Indeed, and it’s galling the lot of them with the exception of the precious few that are willing to be honest with themselves and the public.