The Tea Party must be stopped.

Following up on the Nelson announcement, a few notes on all the clatter afterwards.

Lest anyone get weepy-eyed about Nelson’s bipartisanship and all that, note his comment to Politico after saying that he was quitting instead of facing the voters one last time:

“The Tea Party must be stopped.”

Yeah? Which Tea Party? DeMint’s Tea Party? The Tea Party Express? The people that go to the Tea Party events and defecate on police cars and spread vermin across public property? (Oh wait, we mixed up the TPers and the OWSers…)

So is Nelson against smaller government and stricter adherence to the Constitution? What is it exactly about the “Tea Party”? Because that is an interesting lashing out to his final media swarm of his career.

—See Politico for more from this fool. 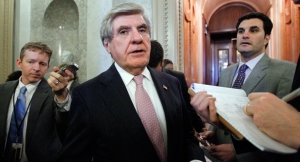