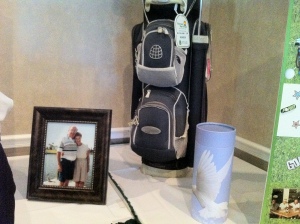 As some of you know if you’ve been reading this blog for the past few months, I have been caring for my 92-year-old mother-in-law Bess (who was diagnosed with Alzheimer’s disease some five years ago) since the beginning of this year (February). Some background first: I married her son — an only child — 44 years ago.  He died of a pulmonary embolism at age 25, leaving me a very young widow with a toddler daughter. His mother Bess and I have remained close friends through the years, she’s been like a mother to me.  In later years, Bess married Paul, a man I called “father-in-law” even though technically, he was not.

OK, fast forward to the present…

Thrust into this situation because of a crisis — Bess’ husband was hospitalized unexpectedly with a vascular artery disease that eventually claimed him three months later (in May).  I have been staying with her through this ordeal.

While I’ve been here, I see how far away Bess has come from being the vibrant, athletic, competitive Type A personality who played golf three times a week at this beautiful golf resort where she and Paul made their home for the past 30 years.  Their world centered exclusively around golf, and their residence here on the 6th hole reflected that.  Awards and trophies they’ve both earned for winning tournaments and  “holes-in-one” are displayed on walls and in glass cabinets. The television is perpetually tuned to The Golf Channel. 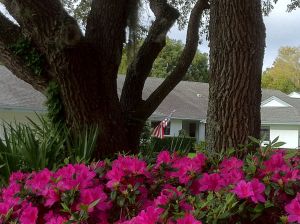 These days, Bess’ clubs remain in storage at the Club’s Pro Shop. She no longer remember friends’ names, has acute short term memory loss and “sundowners” confusion, and has behavioral tics that give her some security, much like a child with a favorite blankie or stuffed animal.  Chocolate chip cookies. A box of tissues — she is rarely without a Kleenex that she continuously twists in her hands when stressed or upset. She leaves a trail of cookie crumbs and Kleenex dust like Grimm’s Gretel on her trail through the woods.

Paul was Bess’ caregiver and protector until his health took a precipitous decline that began last summer when he was felled by a mini-stroke while on the golf course.  It was a warning that — in retrospect — would signal his doom.

He shielded her.  If queried about her, he’d simply reply “Everything’s fine”, when clearly, it was anything but.

So when the call came early last February from my daughter (who had just moved from Florida’s Space Coast to the Pacific Northwest with her husband and their four children) telling me “Grandpa Paul is in the hospital and Gram has been placed in an emergency situation in an assisted living facility for the weekend,” I hastily packed a suitcase with a few days’ worth of items and drove three hours to “rescue” my mother-in-law from a nightmarish cuckoo’s nest of drugged seniors staring into space.

It is now mid-May, and I’ve been here since, among the “Sandwich Generation”.

Life with mother-in-law has been a series of adjustments, doctors’ appointments, daily visits to hospitals, rehabs, hospice, and finally, a funeral. The days have veered from harried, to emotional, to stressful, to empty for both of us.  Her interests are narrow, her attention span limited. The highlight of our day might be a run to Publix for a grocery item, a doctor’s appointment, or a brief late afternoon respite at the Club’s lounge for a “cocktail” with other residents — the regular crowd — at the big table.

Thrust into a situation for which I had no experience, I operated instinctively, praying and hoping that what I was doing for her — for both of them — was the right thing. It was all very hectic, fluid, dynamic.

These days, Bess is confused and angry that he died before her. “It’s not fair,” she complains. “I married a man younger than me thinking I’d never have to go through this.  This is not what I planned. It wasn’t supposed to happen like this.” 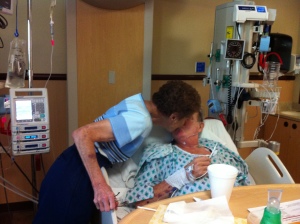 In a way, she’s right.  It’s not what any of us had planned, and that’s the problem: Paul hadn’t planned for it either, despite knowing she had Alzheimer’s and what that meant for her future.  Perhaps it was denial, or maybe he thought there was plenty of time yet, or he could have been just plain overwhelmed by it all, but he took no measures for her or their long term care. Life went on and he coped with her diminishing capabilities the best he could. He shielded the awful news of her worsening dementia from family members who could have offered relief, solutions. An intensely private man, he said very little to their friends about her condition, and at home he encouraged her to stay independent, to such an extent that he unwisely allowed her to manage her own myriad medications, resulting in a two-night stay of her own in a hospital in the midst of this.  Clearly, intervention was necessary and overdue, but it took a crisis to make that happen. I’ve since learned that’s what usually happens — a crisis — before necessary measures are taken.

So now it is left to us, her granddaughter and daughter-in-law, to figure it out. Is their financial picture such that Bess will have enough to live comfortably for the rest of her life, under any circumstance?  Can she remain in her beautiful golfcourse resort-like home or must she be moved to assisted care living?  Is she at a point where she needs to be in a Memory Care facility? Then what? What do we do with her home? Her furnishings? Her car? Her assets?

Fortunately, Bess and Paul wrote their wills some years ago, and their intentions were clearly stated about the disposition of their earthly things upon their demise.  But a durable power of attorney had to be obtained, and an advance health care directive signed. Who should have power of attorney, legal and medical, to keep track of her end of life wishes and ensure they’re carried out? What exactly are her end of life wishes?

Paul did much of his banking and bill-paying online.  What were the passwords that would allow me access to pay the bills and monitor cash in and out? Luckily I obtained that information from him before he passed away.

Where’s the mortgage? The title to the car? Stocks and bonds? It feels weirdly strange to be probing through someone else’s  private files and papers in search of those things.

We were thrust into a seemingly labyrinthian world of Medicare, donut holes, supplemental insurance and medical bills.  Simple things like routine household repairs that had been neglected for months needed attending. Where are the owners’ manuals for the appliances?

We know that Bess can no longer live alone, and needs to be where she has 24-hour a day care and supervision.  She is resisting it.  “I don’t want to leave here.  I love it here.  This is my home!”  And so begins the arduous task of figuring out what’s best for her future and dealing with a very unhappy and sad 93-year old who’s facing an uncertain and frightening future.

Are we doing the right thing?  We angst over that question.  Friends and professionals say we are.  But it’s hard.  Our loved one is miserably unhappy when she is “in the moment”.  Otherwise, when she’s in another mental space and time, she wanders from room to room, reading (sometimes incomprehensibly) the same stacks of paper (bills, etc) that occupy the dining room table, checking her calendar to remember what day this is, twisting her Kleenex and munching on the ubiquitous chocolate chip cookie as she clicks back and forth between the news channels and the Golf Channel.

For Bess, it’s a lonely and sad existence without her “honey”, exacerbated by diminished memories and apprehension for the future.  Her friends have paid their condolences, and sympathy cards are still arriving in the mail (which she eagerly anticipates every day), but her contemporaries are themselves elderly, and most have resumed their lives trundling about in their golf carts at daybreak, or confined to their own homes and routines.  The days of camaraderie with their golf buddies have sadly come to an end.  She stares wistfully out at the 6th hole, dotted with oaks and pines, and jokes that maybe she’ll ask a neighboring bachelor to marry her so she can stay…

More info can be found at:

A Place For Mom

Caregiving for loved ones. The new “normal” for boomers.

Caring for Mom. Joan Lunden talks about life in the “Sandwich Generation”

7 thoughts on “The Sandwich Generation”