But what would be the point? I would continue posting the same things that have gained me a following of 2,815 who come to my page to read the researched backstories that mainstream corporate media is not and will not report.

I heard President Trump today tell a conference filled with young adult conservatives attending the Turning Point USA event that the BIG TECH’s attempts to shut down and shut out the conservative and religious voices is being investigated.

“The hard left is also waging war against freedom of speech. The greatest threat to this radical left agenda is the truth and the problem is we’re not getting the truth from the media for the most part. Some ‘yes’ but for the most part we don’t get the truth.

The Washington Post — which is the Amazon, it’s the Amazon lobbyist — we don’t hear from these people. They don’t call up and say ‘we’d like to check a quote.” I don’t see any more where they say ‘Jim Smith of the White House made the following statement.’ It’s always a source who decided to ‘remain anonymous’ from the White House.

…I used to get the best publicity. Now? I haven’t had a good story in two and a half years. I’m dying for my first good story. They’re gonna give me one someday I think. When I get one, it’ll be the time I’ll say I’ve just achieved something. I’ll say, ‘First Lady, I just got a good story. It’s time to hang it up!’

What they do, it’s a horrible thing, but they don’t do it to many of our people but they look for the people that aren’t the fighters. These dangerous behaviors are the hallmarks of socialism, but socialism cannot survive when people are free to think for themselves. That’s why America will never be a socialist country. It’s never gonna happen.

“As patriots we cherish our First Amendment, we believe that every American has the God-given right to speak his or her mind, and no one can ever take away that right.

For centuries, Americans freely exchanged their ideas in the public square. Now the public square exists online and massive multinational tech companies have gained enormous power to censor opinions, shape public perception and really to decide what information citizens are going to be given.

I have millions and millions of people, but it should be much more. I know exactly what’s happening. I know when it started but the only thing I do say is this: ‘It’s happened from the beginning –  Facebook, Twitter, Google, all of them, right? And they come to me when they want help, they want help because the Democrats want to shut them down. Can you believe it?  How stupid is that for them? But maybe they don’t have the power that we think, because they were totally against me in the election and I’m standing now before you as the President of the United States.

“Everyone tells me when you read, they talk about this tremendous power, and I say ‘that’s right, they make it it impossible!’ and then somebody will look at me, “But Sir, you won. But they’re gaining more and more and more and we’ll look at it a lot of things because they have not treated us as Republicans and conservatives even when you get into religion they have not treated us fairly they haven’t treated fairly a free society cannot allow social media giants to silence the voices of the people that is why I’ve asked my administration to explore every possible regulatory and legislative solution because you have to have free speech you have to have free speech.”

BREAKING: The DOJ has announced they’re opening an antitrust probe into social media companies. “Without the discipline of meaningful market-based competition, digital platforms may act in ways that are not responsive to consumer demands.” 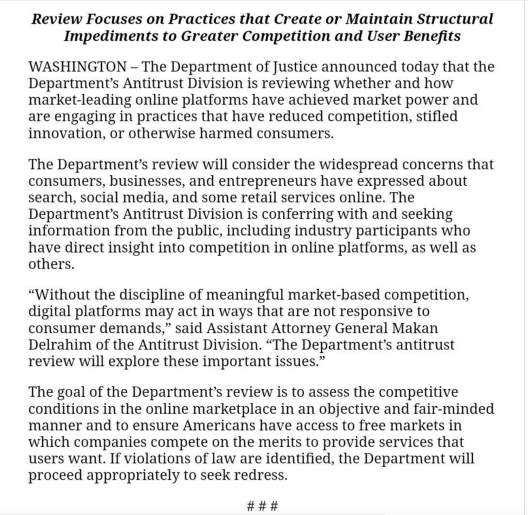