When this story started exploding on social media, I thought it was a joke… but it is not.

Tulsa Oklahoma Mayor G.T. Bynum has declared a “civil emergency” and signed an executive order (outlined below) creating an immediate curfew and locking-down a six block area in and around the BOK Center venue for the Trump rally in the city.  Any MAGA rally attendee who does not immediately vacate the area is subject to arrest.

(Tulsa, Oklahoma) In a Facebook post Thursday evening, Tulsa police announced that an area of downtown will be off limits from 10 p.m. Thursday to 6 a.m. Saturday ahead of the rally. The curfew will again take effect after the rally until 6 a.m. Sunday.

The curfew is the result of an executive order from Mayor G.T. Bynum, which cites both local and nationwide unrest in recent weeks as the rationale for the curfew.

“I have received information from the Tulsa Police Department and other law enforcement agencies that shows that individuals from organized groups who have been involved in destructive or violent behavior in other states are planning to travel to the City of Tulsa for purposes of causing unrest in and around the rally,” the order states.

The curfew affects the area from Archer Street to Sixth Street between Houston Avenue and Boulder Avenue. The people camped outside the BOK Center waiting to get into the rally were being moved out.

Police posted information about the curfew about 45 minutes before it took effect. Those found in violation who refuse to leave will be cited or arrested, according to the Facebook post. (link)

Perhaps there is a legitimate domestic terrorism threat, a “civil emergency”, which requires the curfew approach….

However, one would think if this were not a politically motivated decision, the prudent approach would be to place police in the area as a security precaution.  After all, the maintenance of a curfew perimeter will require a significant police presence to ensure compliance.  So regardless of whether there are people peacefully assembled to attend the rally, a significant police presence is required by the order itself.

1. People are prohibited from walking, running, loitering, standing or motoring upon any alley, street, highway, public property, sidewalk, or vacant premises within the boundaries indicated above, except for official designated duty in response to the emergency, providing public safety services, or going to or from a place of residence or work.

2. The manufacture, transfer, use, possession or transportation of a Molotov cocktail or any other device, instrument or object designed to explode or produce uncontained combustion is prohibited within the limits of the City of Tulsa.

3. The transporting, possessing or using of gasoline, kerosene, or combustible, flammable, or explosive liquids or materials in a glass or uncapped container of any kind is prohibited within the limits of the City of Tulsa, except in connection with the normal operation of motor vehicles, normal home use or legitimate commercial use.

We understand that many people are unaware that a curfew will be in place and barricades are still in the process of being setup. If we find anyone in violation of the Executive Order this evening, we will request that they leave the area based on the curfew. If people refuse to leave the area, they may be cited or arrested.  [LINK]

…And so the control mechanisms to block President Trump’s 2020 campaign officially begin.

CURFEW IN EFFECT FOR DOWNTOWN

As part of our preparations for President Trump’s Rally this Saturday, we are working on making the area secure for everyone’s safety.

As posted earlier, the area illustrated in this map will need to be free of vehicles and pedestrian traffic. 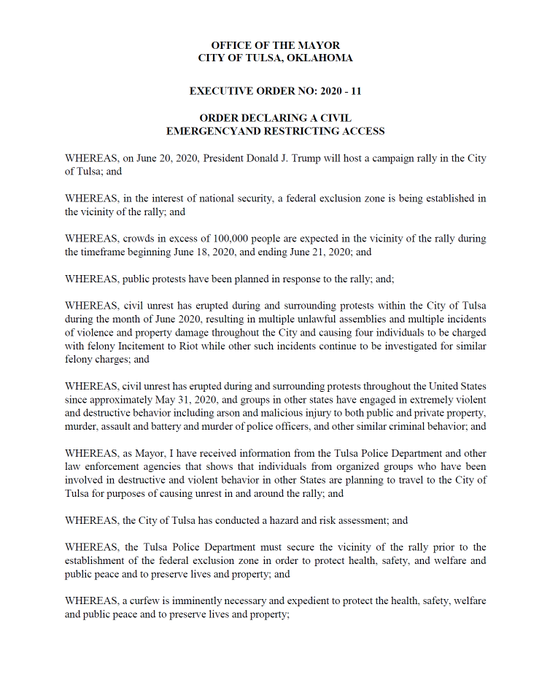 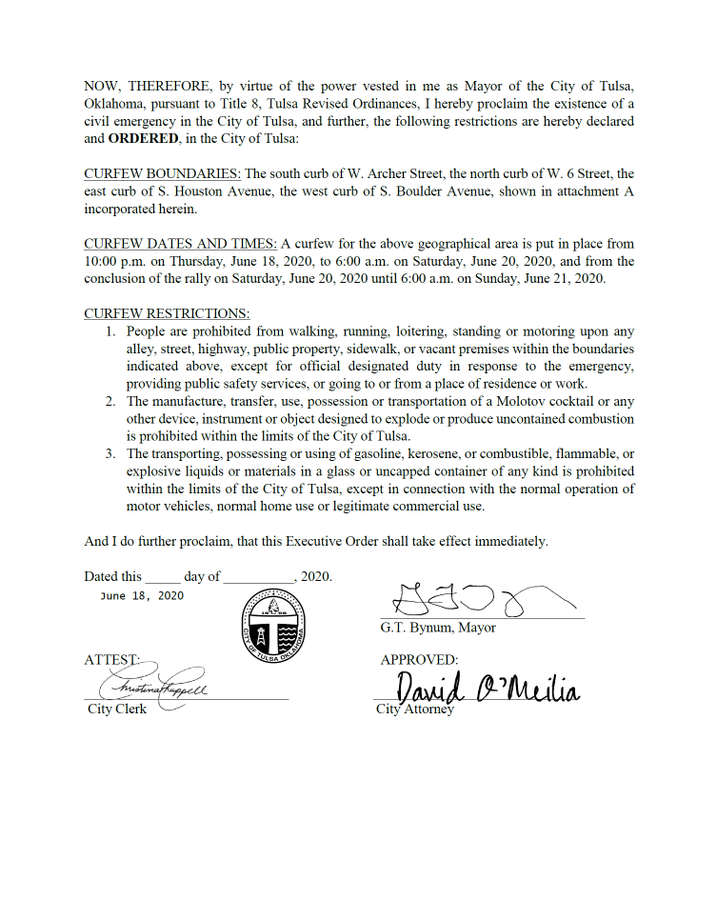 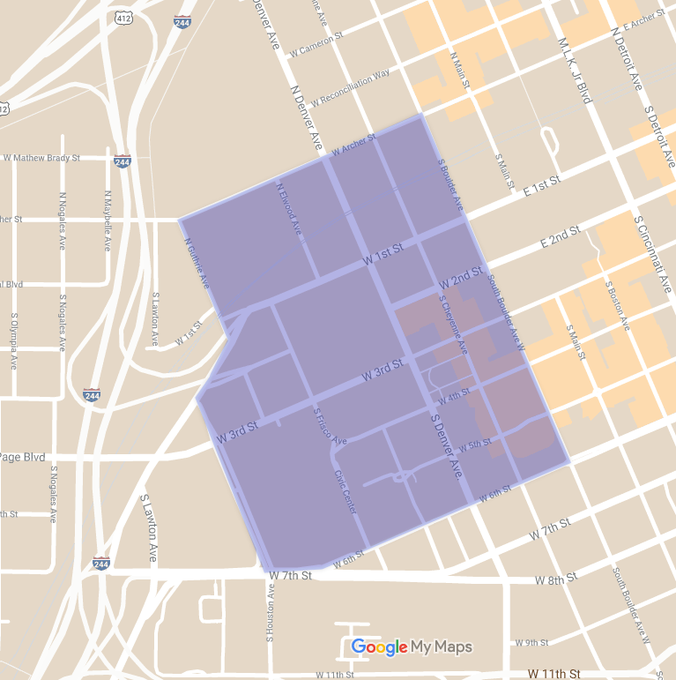 903 people are talking about this

We understand that many people are unaware that a curfew will be in place and barricades are still in the process of being setup. If we find anyone in violation of the Executive Order this evening, we will request that they leave the area based on the curfew.

If people refuse to leave the area, they may be cited or arrested.

This is an unprecedented event for the City of Tulsa and has hundreds of moving parts, we are asking for everyone’s help in making this a safe event for all citizens.

205 people are talking about this

The Tulsa mayor just decided to start a curfew so Trump supporters can’t wait in line for the Trump rally.

3,306 people are talking about this