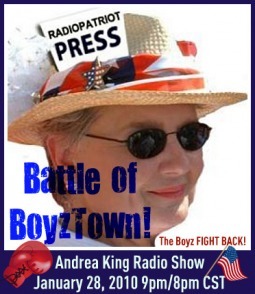 HillBuzz on the Radio

We’re going to talk about everything we’ve seen the “Hope and Change Gang” do to Hillary supporters, in particular, since the summer of 2007.

This afternoon Kevin was on the air at:

Tonight he’ll be on the air with us on…

“The Left’s brought the battle to Boystown, folks. They made it personal this time, and have impacted our future employment opportunities. They’re using tactics that take jobs out of our reach, and ultimately food off our plates. Because they don’t agree with the opinions we have on an amateur political blog.

Because we do not agree with the Liberal-Socialist agenda, Obama’s supporters have taken his “get in their faces” instructions to heart, and have gone for our throats.

And if they think we are just going to sit back and let them get away with doing this to people, without exposing every single one of these “PUMA hunters” as the Alinsky thugs they are, then they have met their match in a lot of ways this time.” — Kevin DuJan, HILLBUZZ

3 thoughts on “HILLBUZZ on the Andrea Shea King Show tonight!”