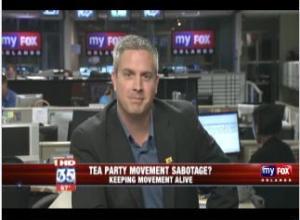 Tonight, Jason Hoyt, grassroots organizer with the newly formed Central Florida Tea Party Council, joins me on The ANDREA SHEA KING Show to explain what happened yesterday during a news conference to announce that various grassroots Tea Party groups were coming together as one organization. In a story that’s gone national…
http://www.blogtalkradio.com/askshow/2010/06/26/the-andrea-shea-king-show 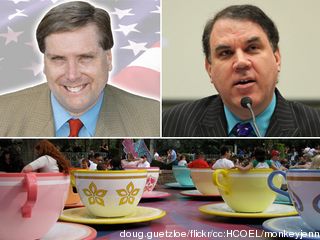 Kristinn Taylor of Free Republic has picked up on a growing story here in the central Florida area involving US Rep Alan Grayson and certain factions of a group calling themselves “Florida Tea Partiers”.  WDBO AM 580’s Bob Hazen broke the story on the confrontation on Thursday: WATCH: Cops called to tense Tea Party confrontation in Orlando.  The story “has legs” and is now attracting national attention.  Local bona fide tea party organizers are doing their best to cull the herd of these opportunists.

Pipitone reports “Florida Tea Party” candidate Raoul Rodriguez (sp?) recently bought radio ads for Grayson on an Orlando station. On the paperwork for the ads, Rodriguez identified hmself as the treasurer for Friends to Re-Elect Alan Grayson, a committee authorized by Grayson.

The nexus between the “Florida Tea Party” and Grayson appears to be a Doug Guetzloe, according to Pipitone’s report from a few days ago titled, “Grayson Paid Company Formed By Fla. Tea Party Candidate:

U.S. Rep. Alan Grayson’s campaign has paid nearly $20,000 to a corporation created by a Florida Tea Party candidate, with help from that party’s top consultant, lending support to Republicans’ claims that Grayson is funneling some of his $30-plus million fortune toward a party that is running a candidate against him in the general election.

A Local 6 investigation has found Grayson’s campaign spent $19,898 with Public Opinion Strategies Inc., a company formed by Victoria Torres, a Florida Tea Party candidate for a state House of Representatives seat in Pinellas County. Torres has said she created the company in December 2008 with the help of the Florida Tea Party’s public relations consultant, Doug Guetzloe.

The owners of Public Opinion Strategies — the people who stand to benefit financially from the multimillionaire Grayson’s campaign money — are not revealed in public records.

The only corporate director listed in state records is the Florida Tea Party candidate Victoria Torres, who swore in court papers in April that she has no cash, no income, no potential income, no stock and no possible asset from any corporation.

In a financial disclosure statement filed last week with her candidacy papers, Torres revealed she earned $10,000 last year from Public Opinion Strategies, but claims no financial interest in the company. Grayson paid the company $16,898 last year and $3,000 in February 2010, according to filings with the Federal Elections Commission.

State elections records confirm Guetzloe is working hard for the Florida Tea Party while promoting that party’s candidate against Grayson.

Guetzloe’s consulting company has donated $30,800 in public relations services to the Florida Tea Party, more than any other outside consultant helping the party.

Yesterday, genuine Tea Party activists held a press conference at the Orlando Board of Elections office to urge Dunmire and the other “Florida Tea Party” candidates to drop out of the elections. The press conference was crashed by Guetzloe, Dunmire and others who acted like Democrats. They constantly interrupted the speaker and threatened to call the police.