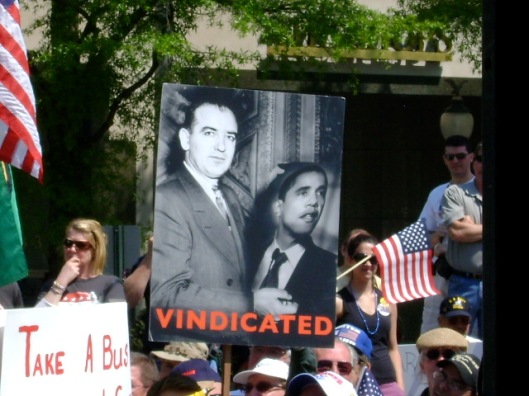 Though I can’t lay my hands on it, somewhere in my radio show archive I have a copy of a December 2007  interview I did with M. Stanton Evans while I was still at WDBO AM 580 in Orlando.  Evans had just released his book “Blacklisted by History, the Untold History of Senator Joseph McCarthy and his fight against America’s enemies”.

The book is the culmination of six years of research, which included documents buried in the U.S. Government archives, including troves of previously unexamined FBI files, formerly missing State Department records, and unknown data from Congressional investigations.

Here’s a photo from the Tea Party Express tour.  It was taken on the final day of the national tour, at Freedom Plaza in Washington, D.C.  I was so struck by this Tea Party sign, I snapped it.  Glad I did.  McCarthy was right.