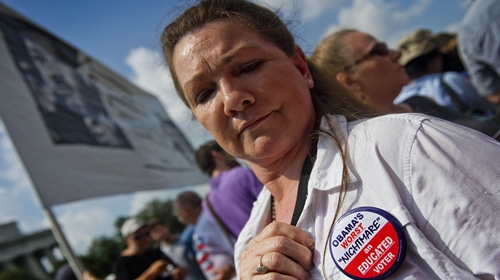 Remember, you only care about registered voters. People who haven’t bothered to register don’t understand the value of their vote, and they’re likely to be the kind who expect others (i.e., the government) to take care of them. Deal only with the registered voters. As Scott Rasmussen said recently, “The people who ultimately vote decide everything.”

When my community turned out 27% of registered voters in last week’s primary, I wasn’t perturbed.  It is best that the uninformed, unmotivated, disengaged voter stay home than muddy the final count with a vote placed in ignorance of the issues, the candidates and the consequences.  As we all too painfully know, it’s how we got Obama, elected by masses of Oprah / MSNBC / CNN / lamestream media viewing ignoramusses (if they were paying attention to any “news” at all) looking for their piece of the pie from Obama’s stash.

So when I read this, it struck me that others see it the same way.  Ace of Spades at the Moron HQ has up an interesting and pragmatic piece by Michael Smith of the Heritage Alliance titled Grassroots Organization… For Morons, which begins with a pointed sports analogy.

Nolan Ryan used to annoy sports reporters because every time they’d ask him the same mindless pre-game question they ask all the other players (“What’s it going to take to win tonight?”), he’d give the same answer: “The key to winning this ball game is to outscore the opposition.”

Now that conservatives have been throwing rallies, renting billboards, and crashing town halls for 18 months, they’re coming to realize that by 7 p.m. Nov. 2, what counts is how many votes they’ve put on the board.

How to get votes? Organization. When it’s done right, it wins elections–and it’s just about the only way to beat an incumbent.

More importantly this season: While felons and Democrat election officials can steal a close one, they can’t beat a blowout. We need a blowout.

It’s an easy read, and one worth your time, especially if you’ve been inspired by Beck’s Restoring Honor rally to do more to affect and effect the 2010 elections.

1 thought on “Deal only with the registered voters”