Women candidates are sweeping the nation.

And they’re getting there with the help of women on the ground and behind the scenes who are working long hours away from home to make it happen.  Last night you had a chance to meet two of them.

Amy Kremer, chairman of the Tea Party Express, has been boots on the ground since last Spring for Sharron Angle in Nevada, Joe Miller in Alaska, and Christine O’Donnell in Delaware.  I traveled with Amy on the Tea Party Express’ national tour last April.  A former Delta flight attendant, Amy is a no-nonsense gal: focused, competent and capable.  Her leadership ability inspires confidence.  Prompted to start a tea party movement the day after Rick Santelli’s rant on CNBC, she hit the ground running, and literally hasn’t stopped since. I am honored to call this fellow patriot “friend”.

Though Amy Kremer is working hard to take America back to its founding principles., she made time from a very busy schedule to join us last night.

Also with us last night is a gal I admire and regard as a dear friend. My regular listeners already know Elizabeth Letchworth, a regular guest on our Wednesday night program.

Elizabeth spent her career in the U.S. Senate, first as a page, then for 26 years as that body’s elected Secretary.  Her corporate knowledge of the Senate is like gold. She knows the players — then and now — and how they play their parliamentary sleight of hand to dupe us. 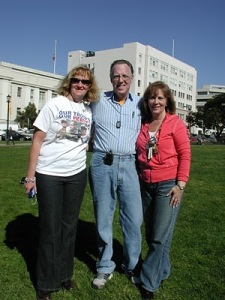 Some time ago, on a bright sunny February day in California, our show producer Dave Logan (Thirdwavedave) traveled to Berkeley — “the belly of the beast” — where a protest was taking place.

Military Moms from the pro-troop organization Move America Forward had assembled to push back against the anti-war, anti-American Code Pink activists who were demonstrating against a Marine Military Recruitment office.

Throughout the day, he called in and I live-blogged what was happening. And almost without fail, he remarked how it was the women who were making a difference, defending our men and women in uniform, getting out there in the Code Pink wackos’ faces.

It was the women who had organized the protest that pushed back and made a difference.  It was the women’s strength and determination that impressed him most.

Women who make the difference… If you weren’t able to be with us last night, you can listen to the archived show or download it.  You can find it here.

1 thought on “The Force of the Tea Party is Female”