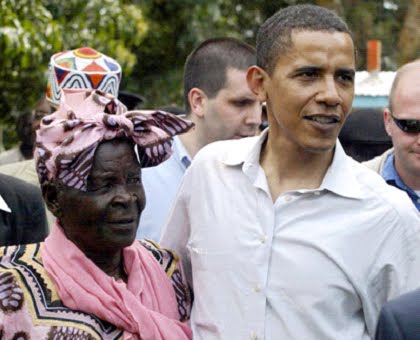 During my radio show Tuesday night, Charles Kerchner (who was the lead plaintiff in Kerchner v Obama), pointed out that Donald Trump said he has people in Hawaii investigating the circumstances of Obama’s birth.  Kerchner says he suspects Trump also has investigators in Kenya as well, and noted the timing of the “coincidence” that security has been beefed-up around Obama’s Kenyan grandmother — the one who said she was present at Obama’s birth in Kenya.

Kerchner questioned the timing of the “beefed up security”, asking if the published reason for the move is a ruse to keep “Mama Obama” sequestered to prevent her from answering questions about Obama’s birth by Trump’s investigators. So who’s really being protected here???

The story was reported in Africa Review:

Security has been heightened at the Kogelo rural home of the grandmother of US President Barack Obama following the killing of al-Qaeda leader Osama bin Laden.

More police officers have been deployed to man Mama Sarah Obama’s in homestead western Kenya following fears of a terrorist attack in retaliation for the killing of Osama by US special forces.

According to the local Siaya police boss Stephen Cheteka, they decided to beef-up security for the relatives of the US President after receiving threats of a planned terrorist attack three days ago.

“We received reports of plans to attack the home of Mama Sarah Obama three days ago and we immediately put in place adequate security measures,” Mr Cheteka said.

The police boss added that the home would be under round-the-clock surveillance, adding that all visitors would be subjected to a thorough screening.

He, however, assured the public that there was no cause for alarm as the family of Mama Sarah Obama had been well informed of the security measures.

Local leaders, led by former Siaya Mayor Obiero Otare, expressed fears that the Kogelo home of the Obama granny could be the target of terrorist attack, especially now that reports indicated that terrorists had penetrated into Kenyan territory.

“Security must be beefed up at the home and the surrounding environs lest we become the next target of terrorists,” observed Mlr Otare.