FLORIDA WILL BE THE TURNING POINT 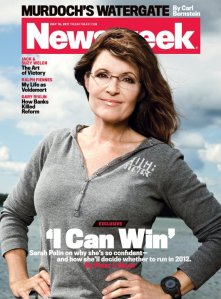 Newsweek’s cover story about Sarah Palin is on balance a positive treatment, giving readers the sense that Palin is as likely to get in the race as she might not.  But with Allen West as her running mate, it gives America a chance to turn this Marxist disaster around.  Think about it:  West would be the mortar between the sturdy bricks.  He’d bring the military experience… the needed 29 Florida electoral votes… and dare I say it?  He’s BLACK. Read his views.

Both Palin and West call it the way it is.  They both cherish the Constitution and with our help, could clean out the Augean stable that is Washington, DC.  Like the Herculean task of sweeping out years and tons of cattle crap in one day, Nov. 6, 2012 would be THE day Palin-West with the help of our votes and Divine Providence reroutes the Potomac and washes out the stinking crap in the House and Senate.

And especially the foulness that permeates our White House.

Like I said, Florida will be the turning point.

I have been waiting for the reapportionment of the congressional seats to make my electoral election analysis.

Democratic strong holds: These are the states that will vote for Obama or the democratic nominee no matter what, also known as the hopeless states: VT, MA, RI, CT, NY, MD, IL, CA, WA, OR, HI, NJ, DE and Washington DC. In 2012 that will give Obama 182 votes.

States that are more likely to vote republican are: VA, NC, OH, IN and IA. They total up to 63 votes.

Currently that leaves republicans 243 and democrats 266.

There is one state left and that is Florida. This state may be the state that decides the president of the United States. Florida’s electoral vote in 2012 is 29.

You need 270 votes to win. With Florida republicans have 272 and democrats would have 295.