How would you like to be able to axe those government programs that: a) do damage to the Constitution; and b) are sinking our economy and bringing our country to its knees?

Now you can. Right here.

Elizabeth Letchworth, our Capitol Hill insider and founder of GradeGov.com, sent along a copy of a report by the Bipartisan Policy Center, a think tank founded by retired Republican Senators Howard Baker and Robert Dole, and retired Democrat Senators Tom Daschle and George Mitchell, the federal government will receive about $172 billion and have bills totaling about $307 billion in August. This leaves a shortfall of about $135 billion. 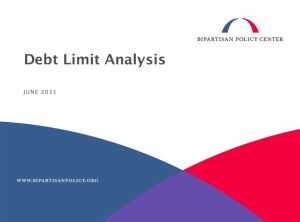 The Christian Post wrote an analysis about the results:

Jay Powell, who served as Under Secretary of the Treasury under George H. W. Bush and is a Visiting Scholar at the Bipartisan Policy Center, made this point in an interview on The Newshour.

“There’s always going to be enough money to pay the interest on the debt, and it’s very unlikely that there will be an actual debt default,” said Powell.

Tea Party Republicans are correct, therefore, when they say that there will be enough revenue to avoid a default. What about Social Security payments?

Social Security payments in the month of August will be about $49 billion. If we subtract the interest on the debt ($29 billion) from August revenue ($172 billion), we are left with $143 billion, more than enough to send out Social Security checks.

So, the Tea Party Republicans are correct again. There will be enough revenue in August to avoid default and to make sure seniors get their Social Security checks.

The available options after those payments are made, however, with only $94 billion left, get more difficult. As Powell points out, we may not default on debt, but we will “default on lots and lots of very important payments.”

Treasury Secretary Timothy Geithner will be in the unenviable position of trying to decide which payments will be made and which will not be made.

Other bills that will be due in August include:

While Tea Party Republicans are correct when they say that there will be enough revenue to avoid default and pay Social Security benefits, they are incorrect to suggest that the current debt ceiling can be maintained without major disruptions. Failure to increase the debt ceiling will, as Powell points out, “have significant effects on our economy and that will ripple throughout the global economy as well.”

Bloomberg news created an interactive tool, based upon the Bipartisan Policy Center’s calculations, where you can play the role of Treasury Secretary by prioritizing which payments should be made and which should not be made.

The U.S. national debt is currently over $14.5 trillion with over $114.7 trillion in unfunded liabilities.