We’re on the bus traveling from Jacksonville FL to Deltona where we will do a 9/11 Remembrance event.

I’ve been asked to say a few words about this momentous anniversary, which is being observed simultaneously in New York City, at the Pentagon, and in a Pennsylvania field.

The inspiration for my remarks come from a post that Dave “Third Wave Dave” Logan wrote last May.  It’s called…

VIEWING IT FROM “WINDOWS ON THE WORLD”

It’s really tough being Obama these days. For instance, today he had to make the monumental decision of whether or not to release OBL’s death photo. Tough decision. It ranks right up there with “should I play just nine holes or 18?”

As for the death photo, Obama decided against its release. Later he’ll decide to play the entire 18 holes, I’m sure.

The reasoning for not releasing the photo seems to be that it will be used to shape a negative opinion of the United States, thus making this a national security issue.

One picture has the power to bring the United States of America to its knees? Of course not, because Obama is dead wrong. Let me give you an example of a real difficult decision.

On the morning of Sept 11, 2001, you kiss your spouse and kids good-bye as you prepare to rush off to work. You work atop the World Trade Center. Not long after arriving to your office, you put your things away, settle in and prepare for another day of work. As you check your calendar, you make note of the decisions you’ll be making as your day progresses. Some important ones, some rather routine ones. Just another day at the office.

Barely into your work day, you and your co-workers find yourselves faced with one little decision that wasn’t listed on your day’s calendar: Do I burn to death, or do I jump to my death?

In a split second, you are faced with what will be your last decision ever: how shall I die, burn or jump? Many decided to jump–over one thousand feet, reaching terminal velocity just prior to impacting the sidewalk below.

Videos and photos of this horror sped around the globe. OBL enjoyed the sight, relishing in its awesomeness. And Obama is worried that the world might think ill of us if we release OBL’s death photo. Rod Serling would have trouble writing this script.

Now, let me tell you about some photos and videos that will be released to the world, and probably already have been. OBL’s funeral and burial at sea–in proper accordance with his so-called religion. Yes, these photos and videos will be shipped to all points on the globe, and in short order. That way a positive opinion of the United States of America will be solidly formed and all Americans will be hailed as great and wonderful people. Loved the world over. Yes, good times are just around the corner. The muzzies finally do love us! 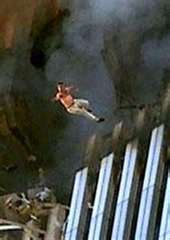