This isn’t over by a long shot…

Glenn Beck is inviting Sharon Bialek to come on his program.  “Let’s get to the truth”, he says. “I’ll give her a fair hearing. Let’s hear her side of the story.  And then we’ll talk to Mr. Cain.”

I’m watching a segment on Focks in which Martha McCallum is grilling the attractive buxom blonde (push-up bra) about the incident in which she claims Herman Cain made inappropriate advances to her.

I have my doubts…  She’s in debt, and that’s a powerful motivator to say and do what she’s doing.  It’s not like it’s never been done before. Could there be motivations other than “saving the country”? Ms. Bialek sought out Gloria Allred, the National Enquirer of attorneys, someone who gives the legal profession a bad name.  Allred knows how to create a media circus.  Is that what Ms. Bialek wanted?

Why didn’t Ms. Bialek sue or bring charges against Herman Cain when she claims this event happened?

Why did she go up to someone (Cain) who had done what she says he did, who had embarrassed, humiliated, “traumatized” her, and then cozy up to him at a Tea Party event last month? Why? Lots of questions about this woman’s story… 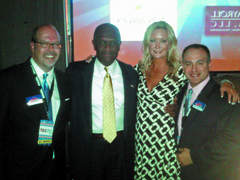 They hugged each other backstage in a full embrace like old friends.

She grabbed his arm and whispered in his left ear.

She kept talking as he bent to listen, and he kept saying “Uh, huh. Uh, huh.”

“I don’t know if what she was giving him was a sucker punch, but he didn’t put his arm down while she was talking to him,” said the Sneed source.

◆The “he”… is GOP presidential contender Herman Cain, who has been accused of sexual harassment by several women.

◆The “she”… is Chicagoan Sharon Bialek, who held a news conference Tuesday as the only woman to PUBLICLY accuse Cain of sexual harassment.

◆The Sneed source … is WIND radio co-host Amy Jacobson, who tells Sneed she witnessed the Cain/Bialek encounter a month ago while backstage at the AM 560 WIND sponsored TeaCon meeting in Schaumburg Sept. 30-Oct. 1 at the Renaissance Hotel and Convention Center.

◆Quoth Jacobson: “I had turned on TV to find out who was Cain’s accuser, and I almost fell over when I saw it was Sharon Bialek accusing Cain of groping her genitals.”

“I was waiting for Herman Cain’s ‘Accuser No. 4’ to surface — and up pops Sharon!”

“I couldn’t believe it. I was shocked.”

“I recall Sharon was hell bent on going backstage at the TeaCon convention — where she cornered him,” said Jacobson.

“I was surprised to hear she claims she did not know Cain was going to be there. Cain was expected and was late.”

Bialek told the media on Monday: “I went up to him and asked him if he remembered me. I wanted to see if he would be man enough to own up to what he had done 14 years ago.”

◆The encounter: “It looked sort of flirtatious,” said Jacobson. “I mean they were hugging. But she could have been giving him the kiss of death for all I know. I had no idea what they were talking about, but she was inches from his ear.”

◆The introduction: “It all began when I took a convention break and joined my pals at the hotel bar. Sharon was drinking Mimosas with them. She said she was a Republican, a Tea Party member, had once dated [White Sox sports announcer’ Steve Stone] and had worked at WGN radio.”

◆The rendezvous: Sharon also said she was anxious to meet Cain again and had once gone to an afterparty with him and her boyfriend years ago. But she never mentioned he had sexually harassed her.”

◆The upshot: Bialek has since applied for employment in sales at WIND radio and is scheduled for a second interview Thursday.

Michael Savage, a man who never minces his words, has a few questions of his own.