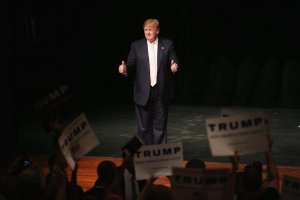 What’s fascinating about The Donald phenomenon is that Americans — fed up to the teeth with the immoral, corrupt decay that occupies DC — have embraced someone who’s telling them to shove it in no uncertain terms.

We’ve been screaming our displeasure at our so-called representatives — the Ruling Elite — who to this day, continue to lie and go about their own avaricious pursuits.

Finally someone is telling them off in a BIG voice. He’s unbowed, calling out these cretins, pointing to the steaming piles they’ve created.

It astonishes me that the elite are scratching their heads, trying to figure out why The Donald continues his rise in the polls. Desperately looking to remove him from the game they’ve rigged. Perplexed that the more they try to destroy him, the higher he flies. Frustrated because the Fox News’ “debate” they planned would sound the death knell for the candidate they seemingly cannot control. Frantic when it blew up in their faces.

Much to our delight — and their consternation — The Donald gives voice to Americans whose anger and frustration with Washington have reached fever pitch. And he’s doing it with an entertaining giant “f*ck you” roar that’s reverberating loudly across the fruited plain.

Trump’s calling them out in a way that these DC greasers cannot ignore.
Remember how they ignored 1.8 million of us marching on Capitol Hill against the despised unconstitutional Obamacare? How they ignored thousands of tea party rallies and meetings across America? How they have and continue to ignore the will of the people despite giving them majorities in the House and Senate to undo the damage?

So detached from Americana, they’re flummoxed at the exuberance with which America has galvanized with the bombastic businessman.

Is it any wonder The Donald’s polls are skyrocketing? Is it any wonder the GOP elite are shatting themselves over it, wringing their hands and looking to Karl Rove’s opposition research team to slay the loudmouthed lion in the Fox News coliseum? How did that work out for you, Roger Ailes? The Murdock money maker was forced to try a different tack, supplicating himself to The Donald in a post-debate phone call. When you can’t beat them…

They’re trying to calculate how they’ll undo The Donald.

Here’s a clue. You won’t. All you mouth breathing politicians, pundits and media elites: WE LOVE THE MESSAGE.

While we’re enjoying the face slaps and extended middle finger Trump is giving to those nattily tied and tailored corruptocrats, we should be mindful that 85 years ago in Europe, there also were an angry people who hungered for relief and gravitated toward someone who promised to restore their nation to greatness, someone who dared thrust not just a middle finger, but an extended stiff arm pointed to a scapegoat and a world that represented all that ailed them.

Caution. Despite our delight and “go get ’em” spirit associated with The Donald, we humans have an inherent nature of not learning from and repeating our mistakes.

Be very, very careful. Watch. Learn. Act wisely. Choose wisely. Because what comes after the Trump-ets blare might be all sound and no substance.