Right here in my back yard at Port Canaveral — you don’t have too go far to find the enemy.

For several years, many of us have been trying without success to get the attention of our local, State, and Congressional elected representatives about this danger that resides right here on Florida’s Space Coast. They know. They just haven’t done anything about it. If something happens, they’ll have blood on their hands.

Here’s a 15-minute video that explains the danger. And I’m including the transcript for you in case you’d like to follow along or in case you’d rather spend the time reading it instead.

Hi I’m Dr. Dave Janda welcome back to the Insider Inside Show. I’d like to thank you for subscribing to our platform and thank you for networking this information to anyone and everyone you know.  Our goal is to provide you information and guests and analysis that the bought-off lamestream fake media will never present, will never touch and today is no different.

I am honored to have two incredibly patriotic courageous Americans who have put their lives on the line for not days, not weeks, but years in providing information that the deep state and their tentacle  – the bought off lamestream fake media  – will not go near.

It’s my honor to have with me today Mary Fanning and Alan Jones.  This is their first time with us on our platform and I hope that we will have more discussions to come because the information they provide — again the bought off lamestream fake media will not touch.

Let’s do a background on both Mary and Alan. First, Mary.  Mary Fanning is an investigative journalist covering national security. Mary is known for her series “The Betrayal Papers” that exposed the … infiltration of the Muslim Brotherhood into the highest levels of the American government.

Did the bought off lamestream fake media… how about Rachel Maddow — did she ever present anything…?

Let me just give you a several that they’ve been involved with, and some of them we’re gonna touch on today.

Folks, by so doing they put you, they put your family and they put everyone you know and every American in harm’s way yet again.

Just as a thumbnail to whet everyone’s appetite for when we come back and do another show on this, Alan and Mary could you give us a thumbnail sketch of Gulftainer and the the importance it has for every American’s safety and security?

Mary Fanning:  We did a series of papers – occasional papers – for – they can be found at the Center for Security Policy –  “The Perfect Storm” being one of them.

But what this is – “Project Pelican” – was a thirty-five year lease that was given to a company, Gulftainer, for the cargo container terminal at Port Canaveral.

Port Canaveral is where air, sea, and Space Command reside.

This was in 2014.  It was under a secret deal named Project Pelican.

Janda: So this is Obama administration?

Fanning: This is the Obama administration. When we looked into who –  the day they announced the deal and signed the deal all in one day, bypassing Florida Sunshine laws for open bidding — when we looked into Gulftainer, we found that the owners and his brother  — the Jafar brothers  — had worked in concert with Saddam Hussein.

One was under investigation at Congress for funding Saddam’s nuclear weapons programs, his WMD programs, chemical biological and nuclear.

That was very disturbing to find that the Obama administration had given Gulftainer a 35-year lease.

Then we found that they had no CFIUS review, no national security threat analysis to decide who these people were, should they be coming inside our borders –  inside the wire so to speak.

Then we found that they were in a joint venture with Russia for the exporting of something known as the Club K.

The Club K appears to be a standard intermodal cargo container yet it opens up via control by a satellite and launches caliber missiles that can have nuclear warheads, biological, chemical or an EMP.

So imagine the Obama Administration puts inside the wire a nuclear mastermind who has been declared  — he was on the CIA’s blacklist wanted for capture or kill — so a declared enemy of the United States, a nuclear mastermind brought inside the wire who’s in a joint venture with Russia that gives a system that can launch internally nuclear biological chemical weapons when our radar is all pointed north or east.

So anything launched from inside the country cannot be managed or protected from.

Now these cargo containers, they leave Port Canaveral or wherever.

They come in — there’s 10 to 20 million every year. Less than 1% are hand checked and once inside, there’s nothing you can do about it.

So imagine, that’s a man working with Russia who’s a nuclear mastermind having access to the entire country through cargo containers that launch these these WMD.

Janda: Okay, so the only person I haven’t heard right now in this particular aspect is are the Clintons, Hillary Clinton.  Is there some kind of tie to the Clintons with these guys?

Fanning: Very much so. They were working in concert with the Jafars…

Janda: Who, the Clintons?

Fanning: Oh yes the Clintons. The people that were working for them, Miguel Lucel who worked on their campaign, gave him a million dollars, was a partner for the man that was put in charge of Port Canaveral, and beyond that,  Varkey Gems working with the Jafars, with Bill Clinton through the Clinton Global Initiative…

Janda: Oh wait, wait!  That would be the same little Global Initiative that Jeffrey Epstein was associated with?

Fanning: Exactly, mm-hmm. And so what’s worse,  there’s a component that connects that to this as well.   The Jafars raised 17 billion — seventeen BILLION dollars  — for the Clinton Global Initiative, connected to this.

Alan Jones: So those are what were called commitments.  So they sort of go around to rich Arab countries, you know these oil millionaires….

Janda: But they bundle the money.

Janda: Okay Alan,  so what did – what has 60 Minutes and 20-20 done on this?  The New York Times, the Washington Post, those great investigative journalists?

Alan Jones: They’ve done absolutely nothing. Oh, and we actually got on the ground, we were approaching… you know, you would think that for example, local affiliates of the big networks and even Fox affiliates — all of them you would think would be interested in this story. They would look at the material and say ‘Oh we’ll get back to you’ and then you never hear anything.

Janda: We’ll get back to you?

Alan Jones: Yes.  I actually, actually ran into Major Garrett who was the White House correspondent for CBS Evening news  – ran into him at a Trump event yeah, and handed him our ninety page – its a ninety, one hundred page report –  on Gulftainer.

He spent about twenty minutes looking at it. And never heard from him again. It never got onto CBS News. It was buried.

Alan: No, no, this was shut down completely. Shut down.  This is a threat to the Obama administration because they engineered this whole deal.

Now getting back to what is the threat —  you know when the container comes in from overseas, it comes on a container ship. These are intermodal containers. What that means is that it can be different modes of transportation, whether it’s trucks on the highways, or trains.  So you’ve got this material coming in that could include –  it could actually include these caliber missiles which are Russian missiles, they can then be put on trains and and trucks and sent to every hamlet in the United States.

But what’s really disturbing was which ports Gulftainer was most interested in. So the first port they actually tried to get into was the port of Jacksonville.

Now Jacksonville is right on the Florida – Georgia state line.  Just north of that state line is Kings Bay, Georgia. That is home to the US Navy’s basically Atlantic Fleet of ballistic missile submarines  –  the Ohio-class submarines –  that’s part of our nuclear triad.

The nuclear triad is a combination of submarines, missile silos and aerial bombers like the B-52s and the B2 s  – the three of those are basically our last line of defense and deterrence against Russia and increasingly against China and even potentially against Iran and North Korea.

So where would our enemies want to get up close and personal?  They would want  – they would love nothing more than to be able to launch a preemptive strike from a couple miles away from our submarine bases.

So they actually tried to get into Jacksonville.  Fortunately Jacksonville shut them down so then they sort of went underground, secretly negotiated this Project Pelican deal and then didn’t announce it to the media or to Congress or the American people until the executives that actually flown over from the Middle East and were there for the signing ceremony… like ‘hey guys! we’re here! We’re setting up a base right here next to Kennedy Space Center which is right where we’re at – the 50th anniversary of the Apollo mission.  Right where we had this historic missions to the moon Apollo 13,  t the Challenger, the space shuttle program and currently all of our top-secret Air Force missions, the space plane SpaceX is there, all of this – Blue Origin –  all this is happening right there.

Not only that, but at Port Canaveral there is also a submarine base that’s less active and less well known than Kings Bay or Kitsap out in Seattle but it’s still very important.  We test all of our Trident missile launches there.

So these guys that were working for Saddam Hussein on his WMD program and , Dr. Jafar is considered the mastermind of Iraq’s nuclear weapons program which was far more advanced than the media would ever want you to know, they’re right next to our submarines and our space program.

Janda: Okay nobody sleeps tight tonight after this.  So this agreement is still in place correct, Mary?

Fanning:  This agreement is still in place

Janda: No no, wait, wait! Now why isn’t President Trump blowing this thing out of the water?

Fanning: Well remember, all the people that were surrounding initially President Trump were people who were in fact working against his initiatives.

Janda: Yeah right, true.  Well we’re gonna do our level best to get this video in front of the president and the hope is that this entire agreement will be immediately deep-sixed Mary and Alan I would like to thank you …

…go to the website The American report.org the Americanreport dot org. 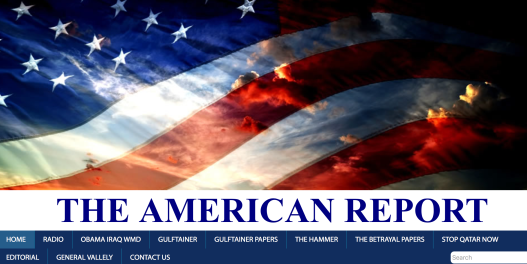 2 thoughts on “Danger, Will Robinson. Danger!”