“US President Donald Trump has cancelled a state visit to Denmark after the nation’s prime minister said Greenland was not for sale to the US.” – BBC

POTUS always has a reason for mentioning the things he does in his Tweets. Art of the Deal. – Lisa Mei Crowley 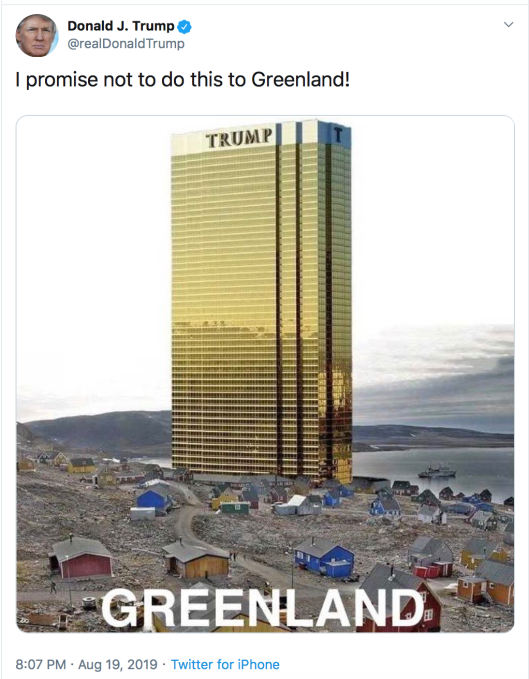 While some are scratching their heads wondering why POTUS brought up the subject of purchasing Greenland, one tweeter proposed that it’s because of “Project Iceworm,” the CIA’s alleged missiles buried under the ice.

Another posits, “Who flies in and out of Thule Air Force Base hundreds of times a year? CIA.  Why? Drugs are becoming harder to import? Or something far worse?”

Coincidentally (?) Usurper President Barry Soetoro is scheduled to travel to Greenland in September for the second time in 12 months. Ostensibly to deliver a speech… but really? 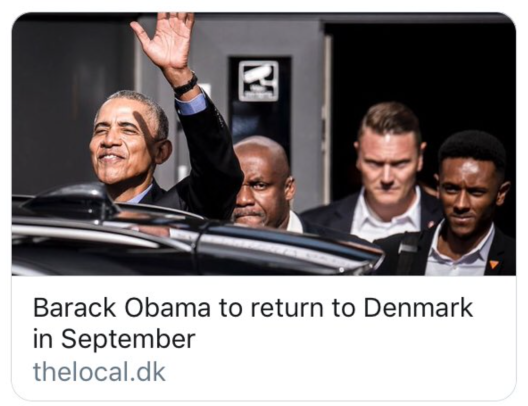 Tammy Bruce has a different theory…

“…One of those issues is the vital importance of Greenland, its horrible mismanagement as the Danish elite virtue signal about their environmentalism, condemning its 55,000 residents to poverty-stricken lives, and the national security risks economic dereliction invite. The incompetence ruining Greenland, in fact, compelled Greenlandic officials to reach out to China as they searched for a Sugar Daddy to fund infrastructure projects.

A thread in The Journal report presents a story that implies the president isn’t serious about Greenland.

The newspaper reported it was at a “dinner with associates last spring” when Mr. Trump brought up the idea and asked people at the table what they thought.

“The person described the question less as a serious inquiry than as a joke meant to indicate ‘I’m so powerful I could buy a country,’ noting that since Mr. Trump hadn’t floated the idea at a campaign rally yet, he probably wasn’t seriously considering it,” The Journal reported, quoting someone who obviously has contempt for the president.

But what’s worth knowing is what precipitated the president’s comments. In 2017, Greenland’s prime minister flew to China and asked, as the Journal reported in February of this year, “Chinese state-run banks to finance the new commercial airports, including a big one for one of the smallest capitals on earth, Nuuk, which can now be served only by propeller planes. The bankers were interested, people at the meetings said, so long as a Chinese company constructed the airports.”

Reports indicate this action was triggered by Denmark refusing to help.

Then-Secretary of Defense James N. Mattis was not happy and convinced Danish officials to fund the infrastructure, sidelining China. This was an effort by China starting in 2018 and only ending when they officially withdrew in June of this year. For those who look past their shallow view of the United States and the administration, one would know it’s no coincidence that the president’s remarks on Greenland became public just two months after we successfully fought off China in their latest swing at the North American island.

This wasn’t the beginning nor will it be the end of China’s designs on Greenland.

” ‘China needs to carefully consider the possibility that a small and weak Greenlandic nation could emerge in the Arctic in the next 10 years,’ wrote Xiao Yang, director of the Arctic Research Center at Beijing International Studies University, in a recent paper. ‘This will be the key node for the successful implementation of the Polar Silk Road,’ ” The Journal reported.

Like so many other places on earth ruined by liberal folly, Greenland is small and weak. By design. James Pinkerton at Breitbart tells us, “[T]he Danes have chosen to treat the territory, for the most part, like a giant nature preserve. And that’s why the native population of Greenland mostly lives in relative poverty as poor dependents of the masters in Copenhagen. Yes, it’s an odd kind of neocolonialism there in the North Atlantic as the politically correct Danes pat themselves on the back for their ‘enlightened eco-consciousness,’ even as Greenlanders stay poor.”

Immediately various Greenlandic officials scoffed at the idea of the island being sold to the United States. The foreign ministry tweeted, “#Greenland is rich in valuable resources such as minerals, the purest water and ice, fish stocks, seafood, renewable energy and is a new frontier for adventure tourism. We’re open for business, not for sale. …”

But they’re not really open for any business because of that “enlightened eco-consciousness.”

Live Science reported, “Why does Trump want the United States to buy the world’s biggest island? The reason, in large part, is likely that Greenland is rich in natural resources, including iron ore, lead, zinc, diamonds, gold, rare-earth elements, uranium and oil, according to the Brookings Institution. …”

It appears the Kingdom of Denmark and Greenlandic leaders see the territory’s value exclusively in adventure tourism, which is clearly not good enough.

“The territory, home to more than 57,000 people as of 2018, relies on Denmark for two-thirds of its budget revenue, and it also has high rates of suicide, alcoholism and unemployment, according to the BBC. Such problems would benefit from investments from social and government service programs,” Live Science reported.

Actually, such problems would benefit from investments that bring jobs, money, self-esteem, financial and personal freedom.

After a few days of screeching from those paralyzed by Trump Derangement Syndrome, the Danish royal family is chiming in with comments indicating they may be moved by the art of the deal.

“In comments sent to Newsweek, along with other publications including The Sun, Dr. Princess Antonia of Schaumburg-Lippe … suggested the interest should be taken as a compliment. ‘A purchase offer is a compliment for magical Greenland, as only desirable areas receive offers,’ she said. ‘The people of Greenland should and can decide about their own destiny.’ Her son, Prince Mario Max Schaumburg-Lippe, added: ‘I love Greenland and want the beloved citizens there to be happy. ‘Whatever they feel best and decide, needs to be supported,’ ” the news magazine reported.

While Democrats and resisters continue to chase their tails, it would serve them well to stop and admit that American exceptionalism is back. For everyone.