Another excerpt from “DRUGGING AMERICA: A TROJAN HORSE” by Rodney Stich, former Federal Agent who shows how the Deep State/ShadowGovernment/Swamp plays the game, protects themselves, and do us and our country irreparable harm.

What we see happening now unfortunately isn’t anything new. It’s what they’ve been doing since the birth of the OSS during WWII. What began as a small cell malignancy is now full blown Stage 4 metastatic CIA cancer that has invaded all three branches of our government. How did this happen? you ask. How could this have gotten so far without us knowing? The answer is in the following quote from a section of the book titled:

Before I lost contact with Parker [Trenton Parker who played a key role in CIA activities in the Caribbean], he described to me during a June 1994 telephone call a meeting he had at Mena, Arkansas at which were present CIA asset Terry Reed and Rose Law Firm Partner Vincent Foster. Parker said that CIA money laundering was the primary topic of discussion. This meeting provided extra support for the fact that the law firm was involved in CIA-related activities.

Another source that I describe in Defrauding America, Leo Wanta, who played a role in destabilizing the Russian currency, described meetings he had in Europe with Vincent Foster.

During the years following these events, Parker told me he wanted nothing else to do with any of the corruption in government. He felt that the nations’s checks and balances were too corrupt, the public too illiterate about government misconduct, and too indifferent, for anyone to show any meaningful concern.”

Read that last paragraph again. The CIA-owned and -controlled corporate “news” media have kept us blind to their corruption. The Department of Justice has played fast and loose. Congress is in on it, either through coercion and blackmail or greed and avarice. Several presidents have been the top executives of the enterprise.

“It is a sobering fact that American presidents (many of whom have been corrupt) have gone out of their way to hire fixers to be their attorney generals. 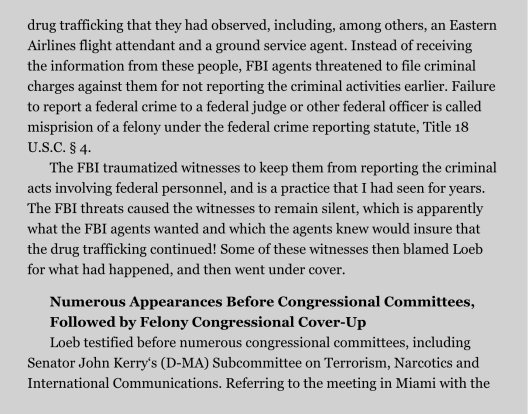