CNN’s Story Claiming the CIA Had to Extract a Top-Level Russian Spy Because They Feared Trump Would Tell Putin About Him Debunked by the Historical Record and… The New York Times?

CNN’s Fusionphilic former Obama official Jim Sciutto published some more #FakeNews — that the US had “extracted” a Russian spy in 2017 because the CIA feared that Trump would tell Putin about him.

But Chuck Ross notes that lovebirds Strzok and Page were discussing their “sisters” (the CIA) “leaking like mad.” In 2016.

145 people are talking about this

The CIA extracted a Kremlin mole from Russia in 2017 out of concerns that media scrutiny would expose the longtime spy, according to a New York Times report.
Former intelligence officials like John Brennan and James Clapper have expressed concerns that President Donald Trump and Attorney General William Barr might leak intelligence on sources to Russia.

But those concerns appear misdirected, as it appears that officials in the intelligence community have provided information to the press about a key Kremlin asset.

But those concerns appear misdirected in the wake of a slew of reports on Monday that the CIA exfiltrated a Russian government official who spied for the CIA for decades from inside the Kremlin.
Those stories appear to be based on leaks of information — likely highly classified — from U.S. government officials with access to information about CIA spy operations. And leaks of those operations began appearing in the press in late 2016, before Trump and Barr obtained access government secrets.

In a bizarre twist, leaks about CIA intelligence gathering operations to the media may have sparked the extraction of the longtime Kremlin mole in the first place.

On Monday, The New York Times and Washington Post reported that inquiries from the media about CIA sources for the Russia investigation prompted the decision to exfiltrate the spy. In 2016, the CIA offered to help the asset, but he refused. But in 2017, as media interest intensified, the CIA again offered to extricate him. He finally agreed.

CNN was the first outlet to report details of the exfiltration, but the network appears to have gotten a key detail of the story wrong. Jim Sciutto, a CNN anchor and former Obama administration official, reported that the exfiltration was carried out in part because of intelligence community concerns that Trump would mishandle highly secret information.

…
The Times and Post undercut that story with reports that the CIA decided to remove the spy from Russia because media outlets were digging up details about the spy.

Details about the source�s activities began trickling out to the press before Trump took office.

The Central Intelligence Agency on Monday evening slammed what it called CNN’s “misguided” and “simply false” reporting, after the cable channel’s chief national security correspondent authored a hole-filled piece claiming that the CIA had pulled a high-level spy out of Russia because President Trump had “repeatedly mishandled classified intelligence and could contribute to exposing the covert source as a spy.”The extraordinary CIA rebuke came as The New York Times published a bombshell piece late in the evening, which largely contradicted CNN’s reporting. According to the Times, CIA officials “made the arduous decision in late 2016 to offer to extract the source from Russia” � weeks before Trump even took office.
Concerns about media reporting on Russian election interference drove the decision, according to the Times, which described the source as “the American government�s best insight into the thinking of and orders� from Russian President Vladimir Putin.

“Former intelligence officials said there was no public evidence that Mr. Trump directly endangered the source, and other current American officials insisted that media scrutiny of the agency�s sources alone was the impetus for the extraction,” the Times wrote.

The purported spy refused the 2016 offer of extraction, the Times reported, citing family concerns. But the CIA “pressed again months later after more media inquiries” threatened the source, and he relented, according to the paper.

Indeed, NBC’s Fusion Ken Dilanian identified the man as likely currently living in Virginia. NBC was so personally worried for this spy’s life they even knocked on the man’s door.
Are they operating on a tip given to them by Trump?

I would think it more likely that he’s once again being fed information by Fusion GPS.

Many people on the right are excited by this story — because they think this is the Fusion Conspiracy’s last attempt to set the narrative before the indictments which they anticipate will start being filed.

Byron York did a podcast with Catherine Herridge four days ago. The podcast did not cover this “we had to extract a spy!” story, as that story hadn’t broken yet.

They don’t actually say that, and so therefore they have no reporting that they can confirm which says that. That does seem to be what both are sensing/hearing, though.

One speculation is that this guy was someone whose Trump Collusion claims were shopped to Steele by Deep State operators — so that Steele could type them up, and recycle them back to the Deep State in another attempt at circular reporting — and that the whole extraction was mostly due to the Deep State wanting to gin up its conspiracy theory with a “lives are in danger!” storyline.
The New York Times debunked central claims of the CNN story, noted below the fold

The two most important paragraphs in the CIA Russian spy extraction story.

1. The spy’s refusal to be extradited compromised the entire Russian election-interference narrative. He was instrumental to the Intelligence Community Assessment on Russian interference. 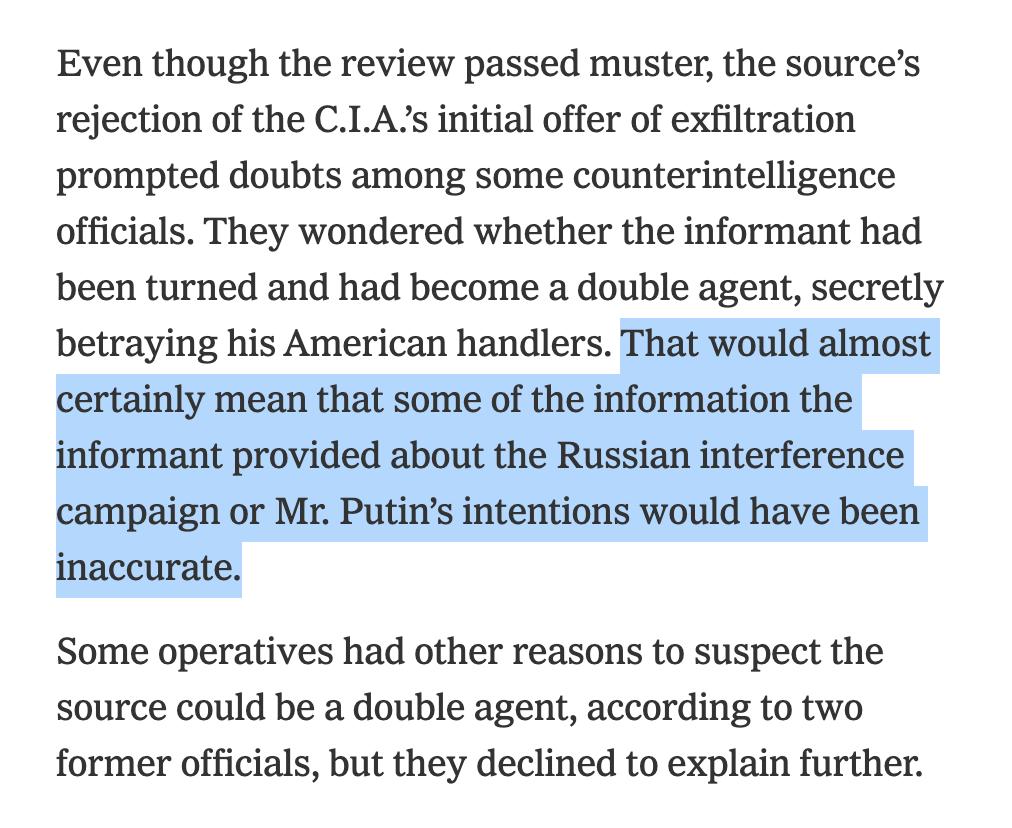 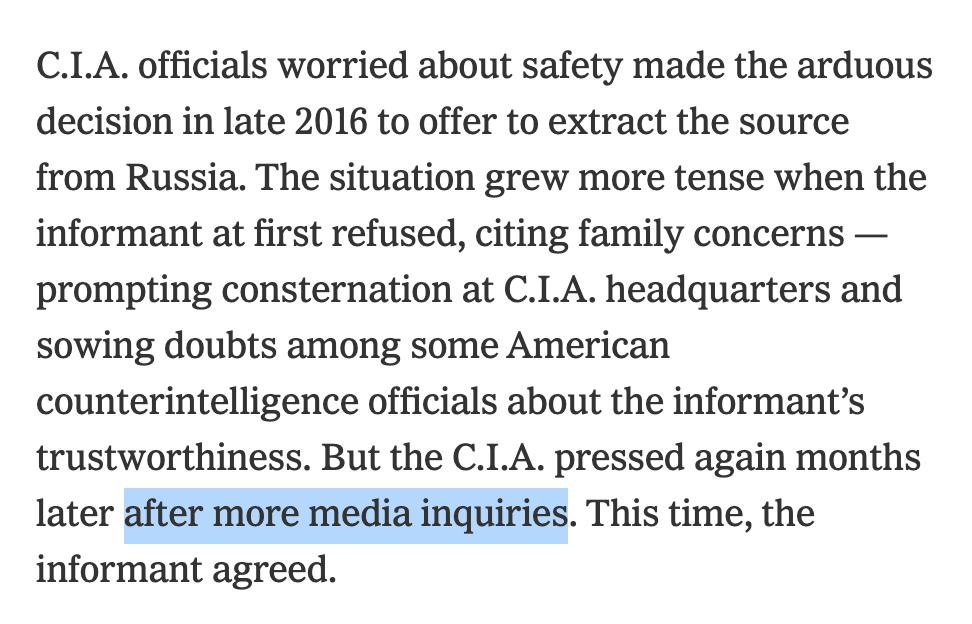 122 people are talking about this

108 people are talking about this

737 people are talking about this

4. “The news reporting in the spring and summer of 2017 convinced United States government officials that they had to update and revive their extraction plan, according to people familiar the matter.”