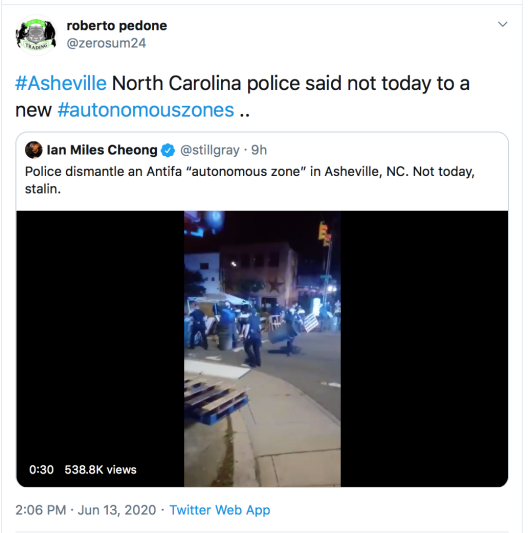 As my RedState colleague Nick Arama reported, the attempts in Nashville and Chicago by protesters to set up “autonomous zones” similar to the one that was set up in Seattle in the aftermath of the death of George Floyd have not gone so well.

The situation Friday night in Asheville, North Carolina was no different. Except in this case we have videos of the police department actually dismantling the encampment not long after occupiers in the area attempted to set it up.

Here’s how the situation played out on social media. Note the excitement and hype:

(A.S.K. NOTE: I tried to get a screen cap of the tweet, but the account is protected.) 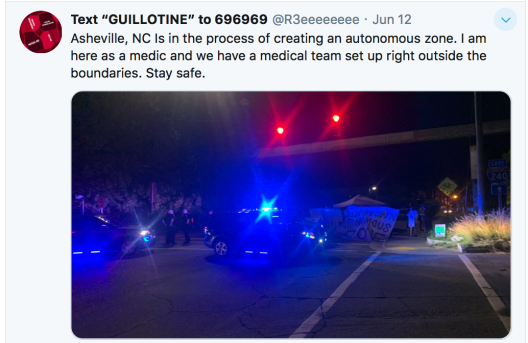 Just spoke with one of the organizers. Apparently they have a lot more people on the way and they intend to hold the area.

Except … there was no “holding the area” by protesters. Police stepped in soon after attempts at setting up camp started to shut it all down:

Update on #Asheville autonomous zone. Every cop in Asheville showed up, proving they have nothing better to do on a Friday night. Tore down barricade. As of 11pm est, <100 demonstrators remaining. Need more people & support. Many will be back tmrw. This is only the beginning. ✊

Here’s video from another angle of the police deconstructing the zone. You can hear “peaceful protesters” in the background, including perhaps the person taking the video, yelling “oink oink!” at police officers at a distance, with one particularly vile person screaming “I smell bacon!”

Here’s what the scene looked like in the aftermath. Clearly the Asheville police were not in the mood to let them try it again:

The #autonomouszone in #Asheville North Carolina not going well pic.twitter.com/aogAx9yY11

Here’s what the scene looked like earlier this morning:

Asheville is known as the “Seattle” of North Carolina, with Raleigh not being far behind. But unlike Seattle, Asheville police officers do not mess around in these matters, as evidenced by what took place last night.

There are murmurings on social media that another attempt at setting up an “autonomous zone” in Asheville will be made tonight. We’ll see how that turns out.