John Kerry went there three days after Trump was elected in 2016. What was in Antarctica for Kerry to tend to?

Anons have been asking the question since 2016. Could it have something to do with this? The illegal trafficking ratlines George Webb’s investigation has revealed? An anon wrote:

“Nobody hauls cargo to Antarctica, when all you need to do is get out on the open sea in International waters, and NO EYES EXIST.

Transfer cargo on fishing boats, yachts, short haul freighters like Cornerbrook, Newfoundland to Sept-Iles, Quebec. Tranship where there are no eyes.

Why do you think Canada put up 3 new satellites a couple of years ago with eyes on the Pacific coast, Arctic coast, and Atlantic coast?

Because all the illegal stuff gets offloaded before the trans-ocean freighters head into their destination ports, Then it gets landed in tiny unregistered ports all along the shoreline, often far up a river in an area where nobody thinks anything International goes on. Maybe there is a sawmill and everybody thinks it is a place that SHIPS STUFF OUT on the river, but nobody watches the water there, so nobody really knows who comes in and who goes out.

I can tell you from living in Vancouver that there is tons of illegal merchandise of all sorts, floating around this city, and lots of illegal workers/slaves who speak only Mandarin and who live in secret flophouses only detectable by the neighbors. They work in restaurants, catering, factories, warehouses and are fed by these same restaurants, catering only to Chinese speaking customers.” – Anon

Looking for trafficking points where no “eyes” exist.  Hmmm…  Another Anon offers this in response:

>Nobody hauls cargo to Antarctica

Yes they do. Peruse the Antarctic ports (science settlements) on Google Earth and you will see imagery of freighters and tankers anchored offshore or delivering cargo. There are some very large “science” settlements on Antarctica and the delivery of supplies during Antarctic summer has to last all year.

There are also military units whose mission is delivery of cargoes to Antarctica by plane. If you dig you’ll find a lot around the edges, suggesting that much more lies hidden. 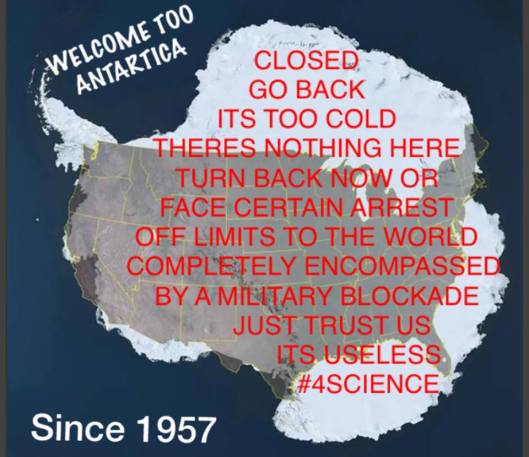 Several articles have been written about Kerry’s trip to the South Pole:

So what could it be?

Kerry’s stated concern about the “environmental sustainability” of the area? Or something nefarious?

Here’s one more piece about the USA and Antarctica.