The rattling of my windows was attention-getting yesterday afternoon as the loud and powerful thunder of a rocket launch out at the Cape rolled and echoed longer than usual throughout the area. A launch into polar orbit took the mammoth spaceship on a different path, nearly overhead, it seemed. Moments after, the startling BOOM!!! announced the return of the spent rocket booster back to earth, landing vertically on its pad — yet another reminder that America is definitely back in the space business.

SpaceX successfully launches 88 smallsats, marking a renaissance in rocketry in 2021 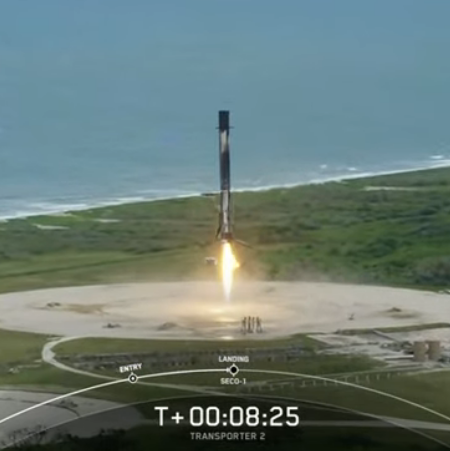 While Transporter-2 won’t beat the unprecedented number of satellites launched on on Transporter-1 [the first such smallsat launch by SpaceX earlier this year], SpaceX says it will still “launch 88 spacecraft to orbit” and – more importantly – carry more customer mass. In other words, Transporter-2 will carry roughly 50% fewer satellites, each of which will weigh substantially more on average.

Ordering directly through SpaceX, [the price] begins at $1 million for up to 200 kg (~440 lb). … A majority of small satellites weigh significantly less than 200 kilograms but if a customer manages to use all of their allotment, the total cost of a SpaceX rideshare launch could be as low as $5000 per kilogram – incredibly cheap relative to almost any other option. For a [comparable] launch … on a Rocket Lab Electron or Astra Rocket 3.0 rocket using every last gram of available performance, the same customer would end up paying a minimum of $25,000 to $37,500 per kilogram to orbit.

The launch also included a handful of Starlink satellites, adding to SpaceX’s constellation. I have embedded SpaceX’s live stream below the fold. As I write this the satellites have not yet been deployed from the second stage, but that should happen shortly.

The first stage landed successfully, the eighth time this booster has done so. The fairings were also reused, completing their third flight. All told, this was SpaceX’s 20th launch in 2021, 18 of which used reused boosters.

The world in general is seeing a renaissance in rocketry. The first half of 2021 has seen 59 launches. That pace could result in 118 launches during the year. While comparable to the number of launches that were routine in the 1960s, 1970s, and 1980s, the numbers then were dominated almost entirely by frequent Soviet military surveillance launches using technology the U.S. abandoned in the late 60s because it was inefficient, expensive, and not very effective. Once the Soviet Union fell those launches ceased.

Today’s launches are being fueled not by a single goverment’s jobs program but by many different nations and private companies. The dominating motive — in the U.S. at least — is not to serve a government’s propaganda or political needs but to make money. And that motive is far more real and useful, and acts far better to feed success, innovation, and rising numbers.

Thus, these numbers are only a precursor. The coming years could very well make them seem small in comparison.