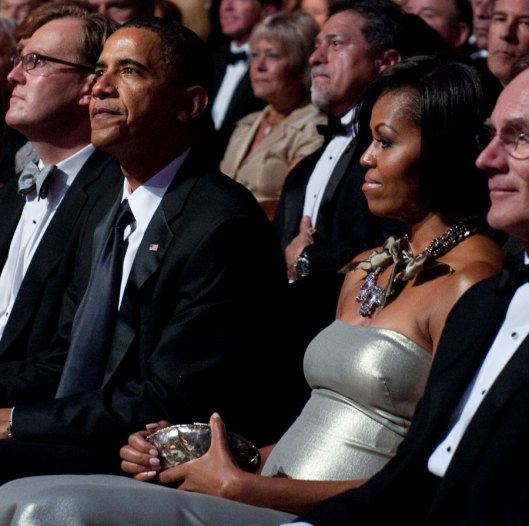 Reception in the East Room prior to performance at Ford's Theatre

Print pool only was ushered into the East Room about 5:20 p.m. where many elegant ladies in long dresses and men in tuxedos were standing sipping drinks and eating small finger food. Transportation Secretary Ray LaHood came over to say hello to the pool but the president and first lady were announced before there was any real conversation. A few faces spotted in the crowd, Senate Majority Leader Harry Reid and Rep. John Dingell and his wife.

The president and first lady walked in and gave brief remarks to the crowd, but pooler was unable to actually see them because everyone was standing. We're headed over to Ford's Theatre shortly and should be able to see then what FLOTUS is wearing.

Remarks: The president welcomed everyone to the White House. He thanked the performers for taking time out of their busy schedules, as well as cabinet officials and members of Congress, including Sen. Reid.

Tonight is about celebrating the great work of Ford's Theatre and what it has done to preserve the legacy of presidents and highlight the importance of the arts and education in our lives and the life of our nation. "In many ways it's impossible to separate the history of America from the history of its music and its spoken word. Soldiers have sung as they've marched to war and raised their voices again while laying the burden to rest."

Lyrics on a page and voices on a stage have helped make us across generations and across cultures, backgrounds, and faiths. Great leaders including Lincoln himself have drawn inspiration and courage from the arts. "And on a personal note, they helped each of us express the joys and hardships of life while bringing us closer to each other."

This is especially true during moments of trial. The president said there have been a lot of trials over the past year and a half. Now, there are brothers and sisters in the Gulf Coast who are going through an incredibly difficult time in the face of a disaster unlike any we've seen of late. "I want to emphasize again that we're going to do everything we can in the weeks and months and years ahead to make this right," and everyone here feels the same way.

But tonight, we will celebrate not only music, song, and performances, but also the incredible legacy of Ford's Theatre and some award recipients who have done some much to help others in this country and around the world.

According to the Ford's Theatre website, the event tonight is described as follows:

Motorcade rolled at 6:56 p.m. and arrived without incident at Ford's Theatre at 7:00 p.m. sharp. Pool was led past a large white tent in the street and a red carpet leading to the front door. We are holding in the lobby of the theatre with two large-screen television sets showing the live performance within.

The president and first lady were announced and walked to their seats at front row center. FLOTUS is wearing a stunning silver strapless dress with a large crystal necklace with what looks like two small fabric bows on either side. Designer unknown to pooler. 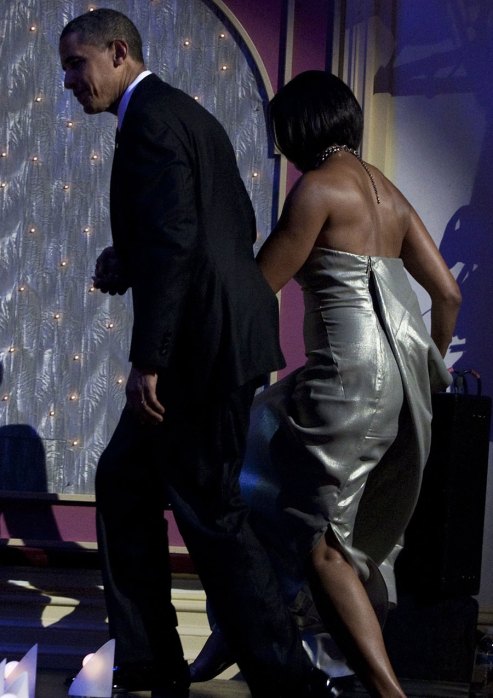 The programme for tonight's performance was just handed out:

Ty Burrell, welcome
Kelly Clarkson, "Everybody Got Their Something" and "Way Over Yonder"
George Lopez
From the Ford's Theatre production of Little Shop of Horrors
Christopher Kale Jones and Jenna Coker-Jones, "Suddenly, Seymour"
Soldiers' Chorus of the United States Army Field Band
"My Country, 'Tis of Thee" and "America the Beautiful" Robin Roberts, family life in the White House
Dick Van Dyke and The Vantastix, "Chitty Chitty Bang Bang Medley"
Lionel Richie, "Three Times a Lady" and "All Night Long" with the Joyce Garrett Celebration Singers

It really bothered me earlier tonight (yesterday?) that the president hadn’t commemorated the 66th annniversary of D-Day.  He didn’t even sign a pro forma statement that could have been written and issued by White House staffers.

Well, I thought, maybe he was busy plugging the oil leak, or preventing Ahmadinejad from building an atom bomb.  Maybe he was telling rabbis what to say in their sermons, or working on the Sestak/Romanoff coverup, or figuring out which surviving segment of the free market he might take over next.

But no, it was none of these.

Somehow I don’t think our soldiers were singing when they hit the beaches in Normandy.

Try as I might, I cannot fathom how someone who doesn’t relate to and love America actually became our president. For all his highly touted education and erudition, Obama appears unacquainted with the basic concept of noblesse oblige.

I really, really can’t understand how he gets away with all this.

And p.s. – What did Desmond “Zionism is Racism” Tutu ever do for America?

The President was busy hob-nobbing with singer Renee Fleming, entertainer Dick Van Dyke, TV pesonality Robin Roberts, musician Lioniel Richie, actor Laura Kelly “and others” at  Ford’s Theatre where they attended a performance in honor of Desmond Tutu and some other South African whose name is not as familiar.