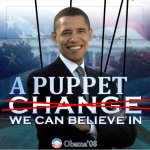 It’s not hard to understand why Obama hasn’t pulled out of Iraq or Afghanistan.  He can’t.  The military industrial complex and their bankers won’t let him.  How do I know this?

If you’ve listened to my radio shows, and read my posts here at the Radio Patriot, you probably know I’m reading Prouty’s book “JFK, The CIA, Vietnam, and the Plot to Assassinate John F. Kennedy”.  It’s a fascinating look into the world of the power elite: the supremely powerful international bankers who keep the books and balances for each side.

“They make these transactions possible by offering the loans, issuing letters of credit, and collecting the interest on the entire package. In many LDCs (third world “less developed countries”) the total amount of interest paid to the banks and their international financing structure amounts to more than half of the total value of dollars earned by their exports.  For this reason, annual payments are seldom more than the interest involved and none of the principal.  This is one reason why the principal never comes back to the United States.” (p. 243 – Ch. Sixteen – Government by Coup d’Etat)

Though the title focuses on the CIA, Vietnam and the plot to kill JFK, this 355 page (not including six pages of notes) book goes much further. It lays out and explains the real power — the international power elite — that designs the strategy and moves the pieces on the global chess board of politics, finance, and wars, domestic and international.

I spent some time today reading more of Prouty’s very detailed book, which is based on a 19-part magazine series first developed by Prouty, with and published by Freedom Magazine.  Prouty served as the chief of special operations for the Joint Chiefs of Staff during the Kennedy presidency.  A retired U.S. Air Force colonel, Prouty was in charge of the global system that provided military support for the CIA’s secret activities.  He was witness to activities, machinations and policy-making in the Pentagon and the White House that few others can claim.  Prouty died in 2001.

“The year was 1964.  Pres. John F. Kennedy had been shot dead months before by bursts of “automatic gunfire” in Dallas by “mechanics,” that is, skilled gunmen hired by a power cabal determined to exert control over the United States government. Lyndon B. Johnson, JFK’s successor, had been only a few feet under the bullets fired at Kennedy as he rode two cars back in that fatal procession.

By 1964 Johnson was becoming mired in the swamp of the Indochina conflict.  Kennedy, who had vowed to “break the CIA into a thousand pieces,” was dead.  LBJ, who heard those fatal bullets zing past his ears, had learned the ultimate lesson; and for good measure, Richard Nixon was in Dallas on that fateful day, so that he, too, had the fact of this ever-present danger imprinted on his memory for future use by his masters. (Ch. Sixteen, Government by Coup d’Etat – p 232)

When World War II ended with the nuclear bomb, the military industrial complex had a dilemma — it understood that the next world war would be the final one, Yet it  needed a way to keep the lucrative business of war making alive and profitable.  How? By fighting a war waged for dollars, without a true military objective, under the control of civilian leaders, a war never intended to achieve victory.  Enter Vietnam.  Sound familiar?

Chapter Eighteen – “Setting the Stage for the Death of JFK”

Kennedy’s NSAM #265 policy would have assured that Americans by the hundreds of thousands would not have been sent to the war in Vietnam.  This policy was anathema to elements of the military-industrial complex, their bankers, and their allies in the government.  This policy and the almost certain fact that Kennedy would be reelected President in 1964 set the stage for the plot to assassinate him.

First of all, NSAM #263, October 11, 1963, was a crucial White House document.  Much of it, guided by White House policy, was actually written by my boss in the Pentagon, General Krulak, myself, and others of his staff.  I am familiar with it and with events which led to its creation.

Our history books and the basic sources of history which lie buried in the archives of government documents that have been concealed from the public, and worse still, government documents that have been tampered with and forged.  As I have just demonstrated above, this most important policy statement, NSAM #263, that so many historians and journalists say does not exist, has been divided into two sections in the Pentagon Papers source history.

“With Kennedy’s announcement that he was getting Americans out of Vietnam, he confirmed that he was moving away from the pattern of Cold War confrontation in favor of détente.  He asked Congress to cut the defense budget.  Major programs were being phased out.  As a result, pressure from several fronts began to build against the young President.  The pressure came from those most affected by cuts in the military budget, in the NASA space program, and in the enormous potential cost — and profit — of the Vietnam War.

Kennedy’s plans would mean an end to the warfare in Indochina, which the United States had been supporting for nearly two decades. This would mean the end to some very big business plans, as the following anecdote will illustrate.

It was reported in an earlier chapter that the First National Bank of Boston had sent William F. Thompson, a vice president, to my office in the Pentagon in 1959, presumably after discussions with CIA officials, to explore “the future of the utilization of the helicopter in [clandestine] military operations” that had been taking place in Indochina up to 1959.

A client of that bank was Textron, Inc.  The bank had suggested to Textron officials that the acquisition of the near-bankrupt Bell Aircraft Company, and particularly its helicopter division, might be a good move.  What the bank and Textron needed to determine was the extent of use of helicopters by the military and by the CIA then and the potential for their future in Indochina.

Both parties were satisfied with the information they acquired from the Pentagon and from other sources in Washington.  In due time the acquisition took place, and on October 13, 1963, news media in South Vietnam reported that an elite paramilitary force had made its first helicopter strike against the Vietcong from “Huey” Bell-Textron helicopters.  It was also reported in an earlier chapter that more than five thousand helicopters were ultimately destroyed in Indochina and that billions of dollars were spent on helicopter purchases for those lost and their replacements.

Continuing the warfare in Vietnam, in other words, was of vital importance to these particular powerful financial and manufacturing groups.  And helicopters, of course, were but one part of the $220 billion cost of U.S. participation in that conflict.  Most of the $220 billion, in fact, was spent after 1963; only $2 – $3 billion had been spent on direct U.S. military activities in Vietnam in all of the years since World War II up to and including 1963.  Had Kennedy lived, it would not have gone much higher than that.

It is often difficult to retrace episodes in history and to locate an incident that became crucial to subsequent events.  Here, however, we have a rare opportunity.

The success of the deal between the First National Bank of Boston, Textron, and Bell hinged on the escalation of the war in Indochina.  A key man in this plan was Walter Dornberger, chief of the German Rocket Center at Peenemunde, Germany, during World War II and later an official with the Bell Aircraft Company.  Dornberger’s associate and later protegé from Peenumunde, Wehrner von Braun, who had been instrumental in the development of the army’s Pershing and Jupiter rocket systems, became a central figure in NASA’s plans for the race to the moon.  Such connections among skilled technicians can be of great importance within the military-industrial complex, as they generally lead to bigger budgets for all related programs.

Kennedy had announced a reduced military budget, the end of American participation in Indochina, and a major change in the race to the moon.  It takes no special wisdom or inside knowledge to understand that certain vested interests considered the Kennedy proposal to defuse Vietnam and these other major budget items to be extremely dangerous to their own plans.

The pressure brought to bear on Kennedy was intense, but some sort of major event was needed that would stir emotions and trigger action.  It is very likely that the death of President Ngo Dinh Diem of Vietnam and his brother, Ngo Dinh Nhu, on November 1, 1963, in Saigon was one of those events.  There were at least eight or nine more that, in retrospect, indicate that a plot against Kennedy had begun to unfold.

Is it any wonder that despite his campaign rhetoric to the contrary, Obama is still in Iraq and Afghanistan???

If you apply what Prouty reveals, it follows that Obama does not do anything unless it is decreed by the international power elite — from pulling out of Iraq/Afghanistan to protecting our Gulf Coast oil-stained states.