A substantial and growing number of Americans say that Barack Obama is a Muslim, while the proportion saying he is a Christian has declined. More than a year and a half into his presidency, a plurality of the public says they do not know what religion Obama follows.

A new national survey by the Pew Research Center finds that nearly one-in-five Americans (18%) now say Obama is a Muslim, up from 11% in March 2009. Only about one-third of adults (34%) say Obama is a Christian, down sharply from 48% in 2009. Fully 43% say they do not know what Obama’s religion is. The survey was completed in early August, before Obama’s recent comments about the proposed construction of a mosque near the site of the former World Trade Center.

Beliefs about Obama’s religion are closely linked to political judgments about him. Those who say he is a Muslim overwhelmingly disapprove of his job performance, while a majority of those who think he is a Christian approve of the job Obama is doing. Those who are unsure about Obama’s religion are about evenly divided in their views of his performance.

The public sees Obama as less influenced by religion compared with George W. Bush when he was president. Yet relatively small percentages say Obama mentions his faith too infrequently or that he relies too little on his religious beliefs when making policy decisions. (entire report here)

And why is TIME Magazine’s cover story desperately telling America “PAY NO ATTENTION TO THE MAN BEHIND THE CURTAIN!” ??? 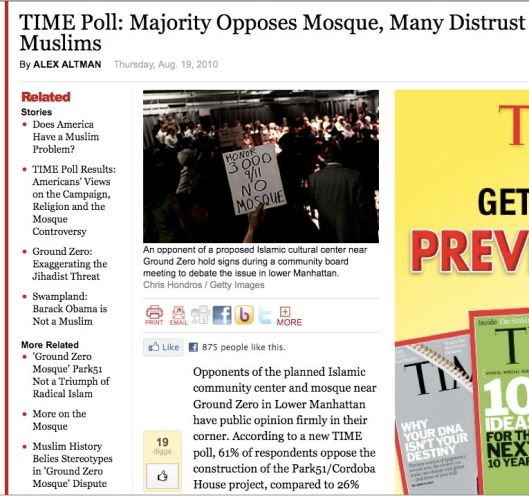