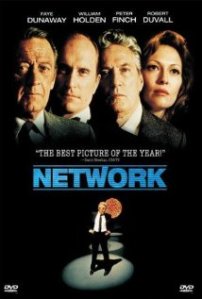 TCM is running Oscar winning movies all month.  Tonight it was NETWORK.  It’s been years since I’ve seen it, so I settled on the couch to watch it again.  But this time, I saw it through different eyes.  The film is set in 1976, but it might as well have been depicting where we are today, it is that prescient.  Here are some examples:

But, man, you’re never going to get any truth from us. We’ll tell you anything you want to hear; we lie like hell.

Right now, there is a whole, an entire generation that never knew anything that didn’t come out of this tube! This tube is the Gospel, the ultimate revelation. This tube can make or break presidents, popes, prime ministers…

This tube is the most awesome God-damned force in the whole godless world, and woe is us if it ever falls in to the hands of the wrong people, and that’s why woe is us that Edward George Ruddy died. Because this company is now in the hands of CCA – the Communication Corporation of America. There’s a new Chairman of the Board, a man called Frank Hackett, sitting in Mr. Ruddy’s office on the twentieth floor.

And when the twelfth largest company in the world controls the most awesome God-damned propaganda force in the whole godless world, who knows what shit will be peddled for truth on this network?

So, you listen to me. Listen to me: Television is not the truth! Television is a God-damned amusement park! Television is a circus, a carnival, a traveling troupe of acrobats, storytellers, dancers, singers, jugglers, side-show freaks, lion tamers, and football players. We’re in the boredom-killing business! So if you want the truth… Go to God! Go to your gurus! Go to yourselves! Because that’s the only place you’re ever going to find any real truth.

“We no longer live in a world of nations and ideologies, Mr. Beale. The world is a college of corporations, inexorably determined by the immutable bylaws of business. The world is a business, Mr. Beale. It has been since man crawled out of the slime. And our children will live, Mr. Beale, to see that… perfect world… in which there’s no war or famine, oppression or brutality. One vast and ecumenical holding company, for whom all men will work to serve a common profit, in which all men will hold a share of stock. All necessities provided, all anxieties tranquilized, all boredom amused. And I have chosen you, Mr. Beale, to preach this evangel.”

I saw Glenn Beck demanding “Where is the media?  Why aren’t they doing their job?”

“I don’t have to tell you things are bad. Everybody knows things are bad. It’s a depression. Everybody’s out of work or scared of losing their job. The dollar buys a nickel’s worth, banks are going bust, shopkeepers keep a gun under the counter. Punks are running wild in the street and there’s nobody anywhere who seems to know what to do, and there’s no end to it.”

…and we sit watching our TV’s while some local newscaster tells us that today we had fifteen homicides and sixty-three violent crimes, as if that’s the way it’s supposed to be. We know things are bad – worse than bad. They’re crazy. It’s like everything everywhere is going crazy, so we don’t go out anymore. We sit in the house, and slowly the world we are living in is getting smaller, and all we say is, ‘Please, at least leave us alone in our living rooms. Let me have my toaster and my TV and my steel-belted radials and I won’t say anything. Just leave us alone.’

I saw Americans rise up in frustration to become the mighty tea party movement.

“I’m as mad as hell and I’m not going to take it anymore!”

And I saw what the future will bring if the tea party movement and the people’s elected representatives don’t stand firm in the face of evil that seeks to destroy this shining city on a hill.

Well, the time has come to say, is dehumanization such a bad word. Because good or bad, that’s what is so. The whole world is becoming humanoid – creatures that look human but aren’t. The whole world not just us. We’re just the most advanced country, so we’re getting there first. The whole world’s people are becoming mass-produced, programmed, numbered, insensate things…