Variations on a theme of media bias. “These Fourth Estate Fifth Columnists.” 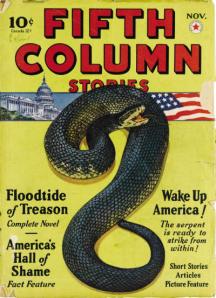 A fifth column is a group of people who clandestinely undermine a larger group such as a nation from within. — Wikipedia.

It has become increasingly obvious that the Justice Department, meaning Attorney General Eric Holder, and the White House, meaning President Barack Obama, were aware – in part or in full – about the plan. As others have mentioned, a second intention of this plan was to perpetuate the myth that American guns are flowing into Mexico, thus creating the violence on the border between the two countries. The idea being that Operation Fast and Furious could be used as a vehicle to institute greater gun control; which is to push forward the Progressive ideal of eliminating 2nd Amendment rights.

What has also become obvious is that the main stream media has no plans to aggressively cover this story, and by aggressively I mean at all. The New York Times, rather than report the facts of this story, (which show the President and the Attorney General as being complicit, if not advocates, in a plan to sell guns to Mexican drug cartels) writes incoherent drivel about Rep. Darrell Issa (R-CA), who sits as Chairman of the House Government Operations and Reform Committee which is investigating the Fast and Furious disaster.

This case has exposed the MSM in two horrific ways. First, it is yet more proof that the MSM refuses to portray the Administration honestly. Second, it shows how absolute the first point is. Border Agent Brian Terry is dead due to this operation, and who knows how many countless Mexicans. This plan has put all US Border Agents at incalculable risk, and shows a level of complete incompetence from those in charge who put Progressive desires ahead of human life. Yet, in adherence with their rigid ideology, the majority of the MSM not only won’t cover the story, they – like the New York Times – write error-laden hit pieces against those who are investigating the story, like Rep. Issa.

Media bias doesn’t kill, but it seems to go out of its way to protect the killers.

The regressive left habitually and falsely accuses Second Amendment activists of not caring about the rest of the Bill of Rights, but this shows that’s just projection and deflection masking their own hostility to all freedom—remember John Kerry saying the press didn’t need to give Tea Partiers equal time because their opinions weren’t valid?

When the history of our time is written — as it always is, by the victors — let’s work toward making sure their shameful abdication of all semblance of ethics is what people remember about these wretched subversives, these Fourth Estate Fifth Columnists.

That means we need to be the ones who win.

3 thoughts on “The Fifth Column: Media”