Jeff is a columnist at The Washington Times and president of the Edmund Burke Institute, a Washington think tank. He is the daily host of “The Kuhner Show” on WTNT 570-AM (www.talk570.com) from noon until 3 p.m.

An outspoken critic of the Obama administration and this Congress, Jeff, in his latest syndicated column today suggests it’s time to impeach Obama.

He isn’t the only one calling for Obama’s impeachment. There are others. Floyd Brown, for example, has been pushing for impeachment practically since Obama was elected.  And has posted Articles of Impeachment at his website Impeach Obama Campaign, ready to go.

The Slaughter Solution is a dagger aimed at the heart of our system of checks and balances. It would enable the Democrats to establish an ominous precedent: The lawmaking process can be rigged to ensure the passage of any legislation without democratic accountability or even a congressional majority. It is the road to a soft tyranny. James Madison must be turning in his grave.

Mr. Obama is imposing a leftist revolution. Since coming to office, he has behaved without any constitutional restraints. The power of the federal government has exploded. He has de facto nationalized key sectors of American life – the big banks, financial institutions, the automakers, large tracts of energy-rich land from Montana to New Mexico. His cap-and-trade proposal, along with a newly empowered Environmental Protection Agency, seeks to impose massive new taxes and regulations upon industry. It is a form of green socialism: Much of the economy would fall under a command-and-control bureaucratic corporatist state. Mr. Obama even wants the government to take over student loans.

Yet his primary goal has always been to gobble up the health care system. The most troubling aspect of the Obamacare debate, however, is not the measure’s sweeping and radical aims – the transformation of one-sixth of the U.S. economy, crippling tax increases, higher premiums, state-sanctioned rationing, longer waiting lines, the erosion of the quality of medical care and the creation of a huge, permanent administrative bureaucracy. Rather, the most alarming aspect is the lengths to which the Democrats are willing to go to achieve their progressive, anti-capitalist agenda.

Obamacare is opposed by nearly two-thirds of the public, more than 60 percent of independents and almost all Republicans and conservatives. It has badly fractured the country, dangerously polarizing it along ideological and racial lines. Even a majority of Democrats in the House are deeply reluctant to support it.

Numerous states – from Idaho to Virginia to Texas – have said they will sue the federal government should Obamacare become law. They will declare themselves exempt from its provisions, tying up the legislation in the courts for years to come.

Mr. Obama is willing to devour his presidency, his party’s congressional majority and – most disturbing – our democratic institutional safeguards to enact it. He is a reckless ideologue who is willing to sacrifice the country’s stability in pursuit of a socialist utopia.

The Slaughter Solution is a poisoned chalice. By drinking from it, the Democrats would not only commit political suicide. They would guarantee that any bill signed by Mr. Obama is illegitimate, illegal and blatantly unconstitutional. It would be worse than a strategic blunder; it would be a crime – a moral crime against the American people and a direct abrogation of the Constitution and our very democracy.

It would open Mr. Obama, as well as key congressional leaders such as Mrs. Pelosi, to impeachment. The Slaughter Solution would replace the rule of law with arbitrary one-party rule. It violates the entire basis of our constitutional government – meeting the threshold of “high crimes and misdemeanors.” If it’s enacted, Republicans should campaign for the November elections not only on repealing Obamacare, but on removing Mr. Obama and his gang of leftist thugs from office.

It is time Americans drew a line in the sand. Mr. Obama crosses it at his peril. 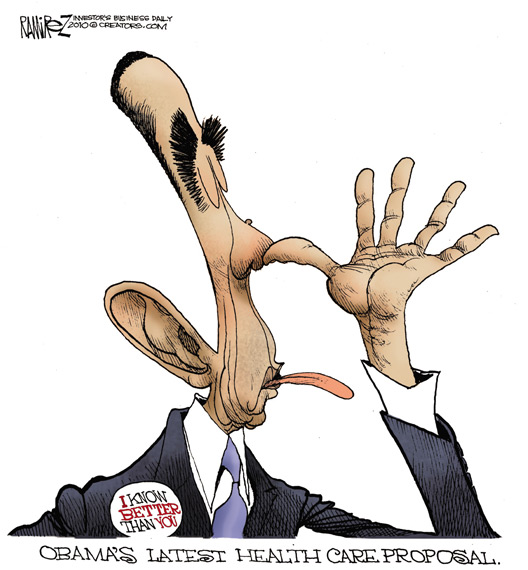