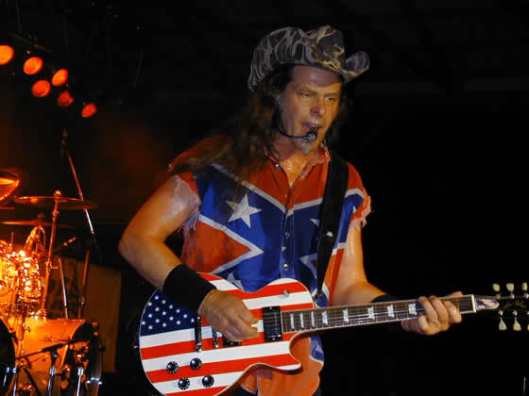 Surber at The Daily Mail quotes our fave rocker…

“Sure, there are peaceful Muslims who abhor violence. Not all Muslims are religious whacks who deserve a bullet. But the statistics are alarming. Last November, Newsmax reported that Muslim imams preach jihad and extremism in 10 percent of the 2,000 mosques right here in the United States. The same article reported that according to a Pew Research Center poll, 25 percent of Muslims in America between the ages of 18 and 29 believed suicide bombings can be justified. Just keep telling yourself that Islam is the religion of peace.”

25%, well that is nothing to get worked up about.

Now if 24% of Americans believe President Obama is a Muslim, that’s a different story.

“The problem America faces is not radical Muslims. The problem is that America lacks fundamental leadership and common sense from our elected officials, who worship at the altar of political correctness. Instead of standing with the victims’ families of Sept. 11, 2001, New York City politicians chose to cast their lot with Islam, the supposed religion of peace and harmony. Me, I am not singing that tune.”

How about this one?

1 thought on “Ted Nugent and Leadership. Rock on.”