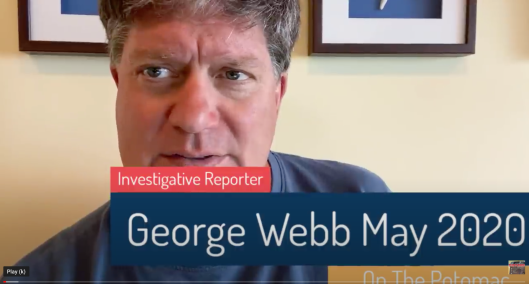 There’s a technology they’re talking about, using biometric technology. We talked a lot about this with NADRA with Imran Awan. So you know, you need a license to drive, well you might need a license to go back to work, or some kind of biometric feed back to a phone which then communicates that you’ve had the latest vaccine.

It seems all very 1984 but it’s happening. We predicted it, and we are on, exactly on the network that enabled it.

I, in my time going on the road to these different places that moved this stuff, bioweapons, I focused very much on uranium because of the book Uranium One, Clinton Cash, et cetera, but it very well could be that the research partner that I had, “Task Force,” journalist Jenny Moore, was the one who was correct about it being more about bioweapons. She was the one who told me that Rahm Emanuel and Imran were in this joint venture in Pakistan at this children’s hospital and had this biolab there. She was the one who was informing me about these meat processing plants being used as a way of injecting bioweapons and doing biotesting on populations.

Slaoui was also on the board of the Human Vaccines Projects and Moderna Therapeutics, also a company called Sutrovax. He’s done post-doc work at Tufts and also Harvard Medical, and he is fluent in English, Arabic and French.

So my initial reactions to this person being named is just all the things that we don’t know about him, and there is such a strong connection to this W.H.O. R&D Blueprint, it all seems preordained, there’s no chance in it at all, it all seems to be scripted.

It’s hard to believe that this person who gets named by Trump was such a close friend of Sina Bavari and such a close friend and contributor to the same exact document that Virginia Benassi puts together. Remember, Giuseppe Benassi is the Head of Security at NATO.

So this seems to be a very scripted NATO play at the end of the day.

There’s some great research here by Harry the Greek on this new person, and I look at this and I see an unbroken chain here between the development of the bioweapon at Fork Detrick and places like that, the farming it out to a NATO partner across the border in Canada to a place like Winnipeg, farming it out to Australian labs, English labs like Porton Down so to get around restrictions, then using offshore partners like A*Star and Singapore Statistics to do the deployment of the weapon, the evaluation of the weapon, the health surveillance of the weapon, and then using that data and bringing it back as illegal trials. As illegal trials! Like the 500,000 PCR test kits that are under lock and key that come here under secret negotiations by our (MD) Governor Hogan through secret negotiations with the government of South Korea.

So it seems to be a very inside game, and it seems like Trump is, unfortunately, the odd man out here.

I’m not sure what the initial, what the solution is going to be here other than just putting the facts up.

There’s just such a strong relationship, there’s a hundred year relationship with GlaxoSmithKline in China. They built the Tianjin Center in 1987. There’s a huge investment in China. It just seems like a hundred percent of these pharmaceuticals are made there in China that are going to be imported and, as part of this deal.

[Sighs and shakes head] It basically seems like our lives are kind of destined to be just sort of cattle at this point. I mean there’s no plan here or no infrastructure plan here, or any kind of plan for people in the United States in this, in this scenario, it’s all NATO. And I would — if there was anything here that was promising in what’s being proposed I would be the first person to jump forward.

There is the company, Cambridge, Massachusetts is the location of Moderna, but there’s a very large offshore presence in other countries, especially China, also Italy, in this company, it’s sort of a front here.

So, I’m very concerned about who’s giving Trump these recommendations, and it looks very much like a NATO play.

Again, I always try to recommend things that Trump can do in the next five minutes, like declassify the people who use the Blackberries, the NATO Blackberries, declassify the information regarding Imran Awan. Just any of the information, to let people know what’s actually going on. His travel schedule back and forth to Pakistan may be a good place to start. His communications and his IP addresses.

So, thanks very much for tuning in today and we’ll keep bringing you more, we’ll keep drilling down. We’ll see about the very strong connection between Sina Bavari and Mr. Slaoui. If there’s an Iranian connection there or not. There’s certainly a connection through the document they wrote together, certainly a connection between this R&D document the World Health Organization has written, really a sort of stacking the deck for themselves for the whole end-to-end: Virus discovery all the way through trials to the release of the vaccine to future modifications of the vaccine. And you are the target. You are the target.